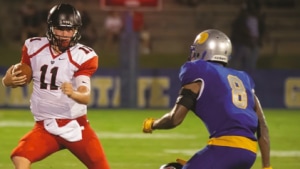 The defending national champion Valdosta State Blazers and national runner-up Ferris State both got off to 1-0 starts in Week 1 of the DII football season.

This week, the Blazers and Bulldogs highlight the DII football showcase national games of the week. Let’s take a look at the top 25 schedule and what to watch.

The Blazers came out and looked much like they did last season: an offense that resembled a runaway freight train. Valdosta State led DII scoring last season at 52 points per game while racking up 524 yards per contest, third-best in DII. Rogan Wells and crew made scoring 38 points look easy, dropping 28 points by halftime on an Albany State team receiving votes in the poll.

Wells is the catalyst and maybe the most important player in DII football if Valdosta State plans to repeat. But he has weapons in versatile Jamar Thompkins at running back — who showed he could score in both the ground and pass game. Brian Saunds, Lio’undre Gallimore and Kenny Benjamin just a few of the receivers defensive backs have to contend with. The Blazers are going to be tough to stop if the defense is a sign of things to come.

Ohio Dominican is the second-straight Blazers’ opponent with ranking votes this season. The Panthers pulled off an impressive road victory at Shepherd, which hasn’t been visitor-team friendly the past five years or so. Evan Ernst and Devanaire Conliffe are an exciting duo at quarterback and receiver, but this defense will need to tighten up to pull the upset. Ohio Dominican was outgained 459 to 329 against Shepherd last week, and if Valdosta State gets that many yards, there’s often quite a few touchdowns to go along with it.

Ferris State snuck by Findlay last week, eking out a 24-23 victory. That was with senior backup quarterback Travis Russell taking the snaps, who had a good opening performance throwing for 228 yards and totaling two touchdowns. The 2018 Harlon Hill Trophy winner Jayru Campbell was on the bench recovering from an elbow injury, and his return this week is still a question mark.

“I would hope that [Jayru Campbell] would play,” Ferris State head coach Tony Annese said in a postgame presser. “I already said that Travis [Russell] would start the first two games, but that doesn’t mean Jayru won’t play.”

“He’s ready to take hits, for sure,” Annese updated Wednesday. “His elbow is really good.”

Should Campbell return it makes this offense one of the most dangerous in DII football. Having to keep tabs on his running ability opens things up for Marvin Campbell at running back, who was held to 51 yards last week. Sy Barnett — one of the most intriguing players in DII as the Bulldogs top receiver, kickoff specialist and punter — had another big week, reeling in 87 yards and a touchdown while earning GLIAC special teams player of the week. He and Campbell had chemistry last season and he too would benefit with him under center.

Central Washington opened on the road against FCS foe Idaho, and hung in well, keeping within three points into the fourth quarter before a late Idaho touchdown but the Vandals ahead 41-31 for good. Running back Michael Roots is the big returner on the offense and he showed why in Game 1 busting out for a 100-yard day. The defense was busy, as four defenders racked up double-digit tackles while three different defenders recorded a sack. Ferris State can’t take the Wildcats lightly in this non-conference road matchup.

Last week, six DII football teams upended FCS programs. Kentucky State highlighted the bunch, picking up its first win in over a year, while top 25 teams Tarleton State and Midwestern State flexed their DII muscle against the next level.

DII vs. FCS: We tracked every upset, here’s how they happened | Kentucky State’s first win since 2017

Week 2 sees six more DII schools take on FCS opponents. We will be following to see if any can duplicate the success of Week 1.