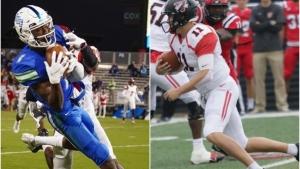 DII football Week 10: The 8 games that can shake up the final regional rankings


Week 10 of the DII football season could shape up to be the best one yet. Three top 25 games plus five more in-region matchups with tremendous NCAA DII tournament implications are on the line. Here’s where you can find both the football rankings, complete schedule for the top 25, and top games previewed.

There are just two weeks left in the DII football season. While every game is pivotal to each of the 40 teams in the current Super Regional rankings, there are quite a few that could shake up the final rankings set for Monday, Nov. 11. Here’s a look at how the top 25 matches up.

Let’s take a look at some of the most impactful games of the weekend, starting with the two DII football showcase games.

DII SHOWCASE: No. 23 Truman at No. 17 Indianapolis | 6 p.m. | NCAA DII TWITTER | FACEBOOK
The Greyhounds have to regroup quickly. UIndy was upset last week by a very under-the-radar Lindenwood team — one that also upset nationally-ranked Truman earlier this season — seeing their undefeated run come to an end and dropping out of the top 10. Truman is in the top 25 of DII football, but absent from the regional rankings in a stacked Super Region Three. This would be one way to grab some attention.

UPSET: How Lindenwood took down its second top 25 team of 2019

DII SHOWCASE: No. 20 West Florida at No. 1 Valdosta State | 7 p.m. ET | ESPN3
The Blazers have won 23 straight games dating back to their final game of 2017.  A bye week last week saw Valdosta State drop to No. 2 in Super Region Two and a win against West Florida could very well change that. While West Florida hasn’t won as many in a row, the Argos are on fire since an opening night loss to Carson-Newman, winning their last seven in a row. This is a Gulf South Conference showdown to watch that could shift the entire bracket if the Argos leave Valdosta a winner.

No. 2 Ferris State vs. No. 14 Grand Valley State | 12:07 p.m. ET | Fox Sports Detroit
Here are two teams in the top 15 of DII football and two teams ranked in the top seven of Super Region Three. Never mind that it’s a battle for the GLIAC as well, this year’s Anchor-Bone Classic will have tremendous DII football tournament implications. The Lakers have lost the last three Anchor-Bone Classics, but the last two have come down to the wire with five points separating the two. A Ferris State loss — something the Bulldogs don’t do too often — would send Super Region Three into a whirlwind, especially with the other big matchups this week.

No. 8 Colorado School of Mines vs. Dixie State | 2 p.m. ET
Dixie State is having a solid season sitting at 7-2 and now the No. 10 in Super Region Four. But the Trailblazers struggled against stiffer competition, with their seven wins coming against teams that are a combined 18-44. This would be a total statement, but taking down this Mines offense won’t be easy. John Matocha and Michael Zeman are exploding into superstars and the Orediggers are steamrolling right now.

No. 4 Minnesota State at Sioux Falls | 2 p.m. ET
The Mavericks have won 33 straight games in the Northern Sun Intercollegiate Conference. Sioux Falls is currently the first team out in Super Region Four. Minnesota State has scored 217 points over the past three weeks, but need to play some stiffer competition to try and capture that No. 1 seed and bye from Tarleton State. The Cougars are 0-2 against the NSIC teams ahead of them in SR4, so this win could go a long way in shaping up the bracket.

Augusta (SD) at Winona State | 2 p.m. ET
No. 7 vs. No. 9 in Super Region Four. This game is huge. Augustana cannot afford to lose if it plans on holding onto that seventh and final spot in the region while Winona State has a real opportunity to jump with a win, especially with Sioux Falls — which is one spot ahead of the Warriors — hosting Minnesota State.

Virginia Union at Virginia State | 2 p.m. ET
This CIAA showdown is a battle of two 7-2 teams. Right now, the Trojans are clinging to the No. 7 spot in Super Region Two, but right behind them is Virginia Union. A Panthers win would see them likely leapfrog into the tournament standings heading into the final week of the season.

No. 12 Northwest Missouri State at Fort Hays State | 3 p.m. ET
This Bearcats offense has been a dominating force outside of one week this season and is coming off its biggest victory of the season, a 79-0 win over Northeastern State. Fort Hays State, too, had a monster win on Saturday, winning 66-6 over Lincoln (MO). The Tigers have controlled this series of late and a win would be huge. The Tigers will need some help elsewhere in the Super Region sitting at No. 10, but this would certainly help. Northwest Missouri State has no room for error, hanging on to the final spot and with Central Missouri awaiting in the final week.