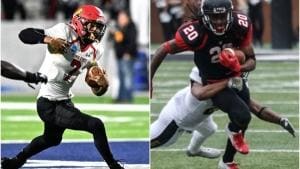 
Welcome back, DII football fans. The 2019 season is finally upon us. We can now get ready for every Thursday and Saturday (and even an occasional Friday) to be chock full of action from Sept. 5 until the DII football championship tournament begins Nov. 23.

Valdosta State has a 15-game winning streak on the line right out of the gates in Week 1. That’s just one of the many things to watch on the first weekend of the 2019 season.  Let’s take a look at the schedule, big games, and what to expect.

While Northwest Missouri State is ranked higher in the top 25, the Tigers have given the Bearcats fits the past two seasons, winners of the last two meetings, making them serious contenders for another MIAA title. Central Missouri, no matter its ranking, is always a challenge in the MIAA. This is a good early-season test for both teams and a chance for the Tigers to make a statement right out of the gate.

This checks all the boxes for a great opening night showdown. Great American Conference rivals. Check. A top 20 matchup on opening night. Check. DII football championship regulars. Check. What more do you need? Harding is riding a streak of three-straight seasons in the DII tournament, while Ouachita has gone two years in a row. It may only be Game 1, but there is a whole lot resting on the outcome of this game.

The Blazers have the longest current winning streak in DII football at 15-straight games. Albany State, which is receiving votes, is an in-state foe, which brings a little extra to the table. All eyes will be on every Valdosta State game this season, especially in a Gulf South Conference with three top 25 teams, so be sure to watch how it gets the Gary Goff era underway on opening night.

1. Can Valdosta State reach the DII football championship tournament?
Every preseason No. 1 since 2014 has two things in common. One is they were all the defending champions, and the second was they all made the DII football championship tournament that same year. The last team to enter a season No. 1 and not make the DII tournament was Valdosta State in 2013. Despite a brand new coach in Gary Goff, the Blazers are stacked with returners and there is little reason to think we won’t see them vying for a spot in McKinney, Texas at the national championship game on Dec. 21.

2. What does Notre Dame (OH)’s Jaleel McLaughlin do next?
The Falcons running back set rookie records in DII football in 2018, cruising to 2,421 yards and leading Notre Dame to the semifinals. A bulk of that team returns, including big offensive linemen Jimmy Burchett and Brandon Nicholson. McLaughlin is set up perfectly to make a run at Danny Woodhead’s single-season record of 2,756 yards rushing set in 2006 at Chadron State.

3. Does Ferris State take home that elusive title?
There are several teams currently on multiple-season DII football tournament runs but few have been as successful as Ferris State’s. The Bulldogs have reached at least the quarterfinals three years running, with a semifinals appearance in 2016 and the national runner-up in 2018. The one thing the program doesn’t have is that national championship. With dual-threat quarterback Jayru Campbell back under center, this may be the Bulldogs best chance at a national title.

DII FOOTBALL HISTORY: Programs with the most titles | Complete history

The AFCA preseason poll was released on Aug. 26. The four semifinalists from 2015 all begin the year as the top four teams — No. 1 Valdosta State, No. 2 Ferris State, No. 3 Minnesota State and No. 4 Notre Dame (OH) — while the national quarterfinalists all populate the top 10.

Here’s a look at the top 25 and be sure to check out our instant reaction to the AFCA preseason rankings release.

We waste very little time getting into big matchups. Elizabeth City State and Morehouse get the DII football season rolling with FCS matchups on the weekend of Aug. 29, but the DII football season gets underway Thursday, Sept. 5. With two top 25 matchups and Ferris State looking to show it is a contender once again, there is plenty to keep your eyes on opening night.

Here’s the complete schedule for the top 25 as well as those receiving votes below. Be sure to check back for score updates as the weekend progresses.