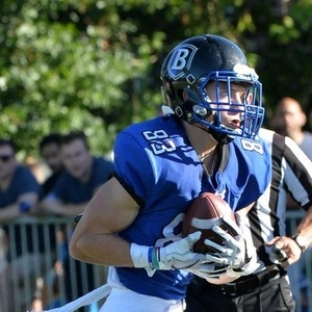 Sturm finished 14 of 21 for 380 yards and no interceptions while engineering the upset against an Assumption team that was ranked eighth in Division II and had not trailed all season. The TD passes to Ryan covered 2, 60, 63 and 50 yards, and he also had another catch that covered 53 yards.

Ryan finished his rookie season with 16 TD catches, the most by a Falcon since 2004, and 1,237 yards, third most in program history.

The win gave fourth-year head coach Bill Kavanaugh his first six-win season with the Falcons finishing the campaign with a 6-4 record (6-3 NE10) and a two-game winning streak. Assumption fell to 9-1 overall and 8-1 conference.

Bentley earned the win despite seeing the Greyhounds turn an 11-point deficit (21-10) into a 24-21 lead in a span of about five minutes. A 32-yard pass from senior Brendan Tobey to Sam Blake capped a four-play, 60-yard drive with 4:14 left in the third and cut the margin to four points.

MORE: Who has the best uniforms in DII? | Stadium?

Following a second straight short punt, Assumption got the ball back at the Falcon 43. It took only six plays before junior Deonte Harris scored from 17 yards out on the opening play of the final stanza.

Assumption countered on its next possession, using ten plays to cover 63 yards and get back in front, 31-28. The first play was a 16-yard pass and the next nine were runs, including a one-yarder by sophomore Doug Santos for the go-ahead score with 4:12 remaining.

However, despite facing a Greyhound team that had allowed only six TDs in its previous eight conference games, the Falcons were not to be denied. Five running plays, including three by senior Martin Bannerman Jr. for 23 yards, brought the ball to midfield. On a second down, Sturm fired a short pass to Ryan, who shook a defender and sprinted down the right sideline for what proved to be the game-winner.

WATCH: UVa-Wise’s WR pulls in DII catch of the year

Assumption’s final possession of the afternoon ended on an interception by freshman Jack Scordato with 50 seconds left, locking up Bentley’s second win of the season over a team ranked in the top 12.

The Falcons, who played penalty-free football, set a season-best in total offense, outgaining the Greyhounds 510-394, including 407 through the air. Bannerman led Bentley on the ground, gaining 73 yards on 15 carries and junior safety Nick Afty once again led the Falcons in tackles with 11, his third straight game in double figures.