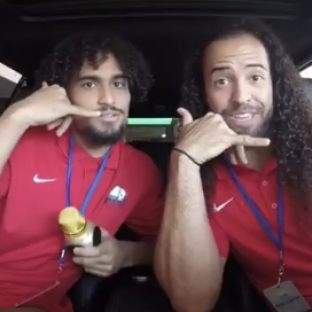 Opening kickoff of the Division II football season is quickly approaching. DII football teams across the nation took the field for the first time Monday, getting ready for the 2017 year to commence.

The football teams of the Rocky Mountain Athletic Conference, however, are already in battle.

A Carpool Karaoke battle that is.

The videos were filmed last week as part of the 11th annual RMAC Football Kickoff. Monday saw the clips hit the Twitter-verse, allowing the fans to decide which RMAC team reigns supreme in the fine art of karaoke. Dixie State got into Carly Rae Jepsen’s ‘Call Me Maybe’. Its week one opponent, New Mexico Highlands, took a different route, going with ‘Amarillo by Morning’ by Jason Bradley.

The RMAC’s Twitter feed broke the videos down into groups of two or three for fans to vote. Although one team will win, the real winners are the fans. As hard as it was to pick just a few, here’s a peek at some of our favorites. Take a look at the smooth sounds of some of the RMAC’s finest and be sure to visit their Twitter feed to see all the teams in action.

‘We Will Rock You’ by Queen sung by Chadron State:

. @csceagles We Will Rock You

‘Ain’t No Mountain High Enough’ by sung by Adams State:

‘Ridin’ by Chamillionaire sung by CSU-Pueblo: