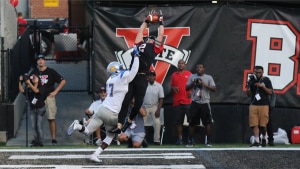 
Week 2 of the DII football season kicked off Thursday night with several top 25 matchups and an old-school rivalry. This Saturday, the DII showcase features the Okefenokee Classic and a conference matchup that could shake things up at the top.

Let’s break down both games and take a look at what to watch.

Dubbed the Okefenokee Classic, Valdosta State returns to Fort Valley State after last year’s bout was canceled due to Hurricane Irma. The Blazers are coming in fresh off a dominant 45-14 victory over an Albany State team that received votes in the preseason poll. Valdosta State has a balanced attack with both Rogan Wells and Adam Robles under center and running back Jamar Thompkins coming off a big 2018 debut. The Blazers can’t look ahead, as a 2-0 start would be huge as they prepare for their September 14 Gulf South Conference opener against No. 11 West Alabama.

Fort Valley State had to open on the road in Tallahassee, Florida against FCS foe Florida A&M and the results weren’t as they had hoped. The Wildcats fared very well in the Southern Intercollegiate Athletic Conference last year going 5-1 in conference play. This would be a huge momentum builder heading into their September 15 SIAC opener at Miles College.

A good old-fashioned Great American Conference early season showdown is set to take place in Searcy, Arkansas Saturday night. The Muleriders and Bison are projected to battle atop the GAC all season long, so this is a key matchup with possible postseason implications already.

Of course, Harding proved last season that early season losses aren’t the end all. The Bisons dropped their first three games before rolling off eight-straight conference wins to land in the DII playoffs. There, the wins kept rolling, as Harding went on the road and defeated No. 6 UIndy, No. 9 Ashland, and No. 10 Ferris State before falling in the national semifinals to eventual national champions Texas A&M-Commerce.

Harding’s offense is run heavy, as quarterback Preston Paden doesn’t look to throw often in the Bisons’ old-school smash mouth scheme. Both Tristan Tucker and Cole Chancey had big rushing days in Harding’s opening win, but there are plenty of hands that can carry the rock.

Southern Arkansas is one of four GAC teams getting a nod in the most recent AFCA poll, receiving 22 votes. A win over Harding could propel the Muleriders into the top 25. Where the Bisons are run-heavy, the Muleriders are pass-heavy with returning quarterback Barrett Renner amongst the most exciting in all of DII football. The defense will have its hands full with the Harding rushing attack, but Renner and his offense can counter with an explosive aerial game. It should be an exciting chess match in the GAC Saturday night.