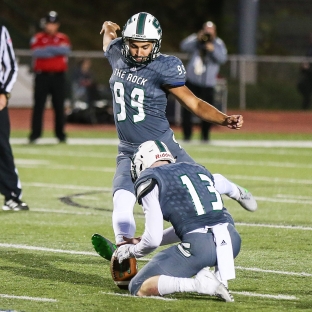 It took a touchdown on the last offensive possession of regulation for the second straight week for Slippery Rock (5-0, 2-0 PSAC) to even have a chance in overtime after California (4-1, 1-1 PSAC) reeled off 17 unanswered points in the fourth quarter to take a 44-37 lead with 2:14 to play. The Rock answered the call by going 73 yards in just 1:27, capped by a 24-yard TD pass from Tanner Garry to Milly Raye with 42 seconds left. SRU kicker Jake Chapla had a PAT blocked earlier in the game, but drilled the tying try to even the score at 44-44.

California took a knee with 38 seconds left to send the game to overtime, where SRU won the opening toss and elected to play defense on the first possession in its first overtime game since 2012. Marcus Martin came up with a sack for a loss of nine yards on third down to force the Vulcans into a 48-yard field goal attempt. Cal kicker Will Brazill hadn’t missed a kick of any sort all season, going 10-of-10 on field goals and perfect on PAT kicks, but missed wide left to keep it tied at 44-44.

SRU ran the ball three times and set Chapla up on the left hash for a 36-yard try. After a Cal timeout, Chapla drilled the game-winner to seal the upset victory.

FB: Here it is… Jake Chapla’s game-winner and the call by our own Bob Cupp from @RockStation977 pic.twitter.com/o4d5mwEcVo

The two teams finished with nearly identical offensive outputs with Cal posting a 407-406 edge in total offense. The Rock threw for 268 yards and rushed for 138, while Cal passed for 326 yards and ran for 81 yards on 30 carries.

Garry was under pressure often, getting sacked four times in the game after being sacked just three times in four games entering this week. He threw a pick-six on the second SRU possession of the game that put Cal up 14-0, but responded from there, finishing 25-of-41 for 268 yards with two touchdowns. Raye caught nine passes for 82 yards and one score. Marcus Johnson caught four passes for 60 yards and finished the game with a team-high 179 all-purpose yards after adding 117 kickoff return yards.  Andrew Bridgeforth caught three passes for 36 yards and one score.

MORE: Dance moves, hash browns have made Milly Raye the most exciting WR in DII

Isiah Neely scored three rushing touchdowns and finished with 48 yards on the ground. Chacar Berry added 88 rushing yards and one touchdown on 14 carries.

Chapla made two field goals in the game, both with zeros on the clock, after he also hit a 42-yarder as time expired in the first half.

Martin finished the game with a team-high 10 tackles, including 2.0 sacks that brought his NCAA Division II career record to 49.0 sacks and 82.0 tackles for loss. None were more important than the third down play in overtime. Dylan Whiteman recorded nine tackles and one sack. Rahdezz Henderson made his first career start and recorded 1.5 sacks. Tavarus Sample forced one fumble, which was recovered by Martin to set up a touchdown in the second half, and Tim Vernick recorded his first career interception.

Cal was paced by QB Michael Keir, who was 18-of-36 for 326 yards with one touchdown and one interception. Luke Smorey caught seven passes for 103 yards and Tom Greene caught six passes for 132 yards. Tyson Hill caught the lone TD, a 49-yarder. Jimmy Wheeler recorded 77 rushing yards and two scores on the ground and Jalen Bell added 29 yards and one TD on the ground.

Brazill made three field goals in the game, connecting from 34 yards, 38 yards and 21 yards before missing from 48 yards in overtime.

Slippery Rock kept pace with No. 4 Indiana (Pa.) atop the PSAC West standings and will travel to Mercyhurst next Saturday for a noon kickoff.

Both teams went through big swings of momentum throughout the game, with the Vulcans scoring the first 17 points to open up a 17-0 lead before the first quarter even ended. The Rock responded with 10 straight points to close the half trailing 17-10 and opened the second half with another TD to cap a 17-0 run and tie the game at 17-17 with 9:02 to play in the third.

Cal took the lead back on its next possession after a 51-yard pass set up a short run to make it 24-17 in favor of the visitors with 8:20 to play in the third.

Slippery Rock answered with 13 unanswered points in what became a 30-point third quarter. A pair of TD runs from Neely put SRU up 30-24 with 5:22 to play in the third.

Cal answered with a field goal from Brazill to cut the deficit to three points, but SRU kept the pressure on with another long drive, this time capped by a 21-yard run from Berry to make it 37-27 with 12:55 to play.

The Rock had a chance to put the game away after Vernick intercepted a pass on the next Cal possession and set SRU up at the Vulcans’ 28-yard line. The Cal defense came up with a sack and forced SRU into a punt, giving the Vulcans’ offense a chance to rally back.

Cal responded with three straight scoring possessions, first getting a pair of TD runs from Jimmy Wheeler on back-to-back possessions to regain the lead and then tacking on a field goal from Brazill with 2:14 to play. That field goal came after SRU fumbled on a kickoff with under five minutes to play. The Rock defense came up with a key stop and forced the field goal to keep the deficit to seven points.

SRU scored the tying points after a balanced drive that took eight plays when Garry found Raye through a seem down the middle with 42 seconds left, setting up the finish.

NOTES: Slippery Rock head coach Shawn Lutz improved to 12-4 at SRU … The Rock defeated a top five team for the first time since 1998 when SRU defeated No. 2 Indiana (Pa.) … Saturday’s game marked the first overtime game for SRU since the 2012 season against Edinboro on Homecoming … SRU improved to 13-0 in its last 13 home night games and improved to 15-1 at home since the beginning of 2013 … Marcus Martin recorded 2.0 sacks to bring his career and Division II record totals to 49.0 sacks and 82.0 tackles for loss … he moved up to fourth all-time among all NCAA divisions in career sacks and now needs 4.5 more to tie the all-division record … Tanner Garry now has 18 TD passes on the year, moving up to 10th on the single-season ledger at SRU … Milly Raye has a catch in 32 straight games and a TD catch in every game this season … he now has exactly 2,000 career receiving yards, becoming the seventh player in school history to reach that total … he also has 150 catches now, becoming the fourth player to reach that number … Raye moved up to a tie for third with his 21st career TD catch … Jake Chapla made two field goals to move up to a tie for 11th all-time at SRU with 16 made field goals.