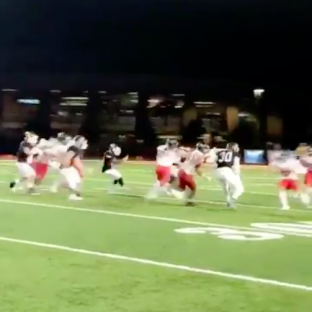 Owatonna wide receiver Ty Sullivan caught the football and headed up field late in the first half of the Minnesota Class AAAAA championship game on Nov. 30, 2013, in Minneapolis.

Just then, his foot locked into the Metrodome turf and his knee buckled. The last Prep Bowl game ever played at the Metrodome also appeared to be Sullivan’s last as his left knee was shredded in gruesome fashion.

Surprisingly, Sullivan said he felt no pain, his adrenaline running high, but he knew it wasn’t good.

“It was just a normal football play, and my foot got stuck,” Sullivan said. “It was like a bunch of rubber bands snapped.”

After three surgeries and nearly four years of rehab, Sullivan returned to play in his first game Sept. 28 as a member of the Minnesota Duluth football team. Playing on the Bulldogs’ kickoff unit, the senior made the tackle on his only time on the field.

“I think there are a lot of lessons that can be learned from Ty,” UMD coach Curt Wiese said. “It’s not always about making plays. It’s about being a good person and leader, and when your time comes, although it may be for only one play your entire career, you need to be prepared for it. He prepared four years for one opportunity, and when it came, he did it.”

Sullivan was a multisport athlete at Owatonna, Minnesota, where he played wide receiver and safety. He received solid NCAA Division II interest and some from Football Championship Subdivision programs. UMD had Sullivan as its top safety prior to his injury in Owatonna’s 24-0 title-game win over Brainerd.

“The only thing left of my knee was the medial collateral ligament,” Sullivan said.

Even so, Sullivan came to UMD determined to play again while earning his chemical engineering degree. He’ll graduate in May. This is the first year he has practiced. He is listed as a punter, plays special teams and works on the scout team. He is only active for home games.

First play back after 4 years. Forever thankful for everyone who helped me get back on the field! https://t.co/B3x6vNSZfO

“Don’t get me wrong, standing on the sideline for three years sucked, but it’s totally worth it,” Sullivan said.

Since he couldn’t play, Sullivan pushed his teammates in the weight room and in running drills. The 6-foot, 210-pounder can squat 450 pounds with his reconstructed knee. Sullivan was named a UMD captain by his teammates despite having never played.

“Ty has never missed a meeting or an opportunity to work out with the team,” Wiese said. “He is not doing this to try to inspire anybody. He’s doing it because he loves being part of the sport of football. A couple years ago he stepped back and realized his playing career might be altered, but he had a lot of value to our team in other ways.”

Moving laterally and deaccelerating is difficult for Sullivan because his hamstring tore off and couldn’t be reattached to the original location point. Even so, he’s recovered to the point of being able to play again.

That opportunity played out like a Hollywood script on Sept. 28 at Malosky Stadium as Sullivan entered the Bulldogs’ 34-21 victory over St. Cloud State. Sullivan, filling his lane on UMD’s kickoff unit, ran down the field, ran past one defender, bounced off another and made the tackle in the only play of his college career.

The way the Bulldogs’ sideline erupted, some fans thought UMD may have recovered a fumble, but it was all for Sullivan, with teammates knowing what he endured for that singular moment.

“Everybody on the sidelines was going nuts,” Sullivan said. “Everyone was super happy for me. That just goes to show, when people ask me, ‘How did you stick with it for four years, never even stepping foot on the practice field until your last year?’ It’s because I have my best friends and brothers around me and everyone supporting me. It’s easy to do when you’re doing it with the people you love.”

My guy @TySullivan_21 w/ his first college tackle tonight!! Never seen anybody work so hard for something they love, 4 years in the making

Sullivan’s story might appear like that of “Rudy,” or Archibald “Moonlight” Graham from “Field of Dreams,” but he’s a competitor who wants to play, and Wiese expects him to play in UMD’s final two home games Oct. 21 and Nov. 4. He has no doubt he chose the right place.

“My role is that of a grinder, trying my best and showing the other guys you never give up and you keep working hard,” Sullivan said. “This is a family up here, and that’s why I decided to come here. Our coaches stress it, our players live it and it’s just a good place to be.”

This article is written by Jon Nowacki from Duluth News Tribune and was legally licensed via the Tribune Content Agency through the NewsCred publisher network. Please direct all licensing questions to legal@newscred.com.