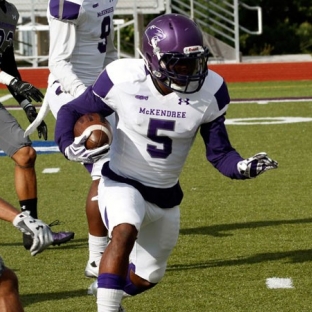 LEBANON — Through his first four seasons as the head football coach at McKendree University, Mike Babcock’s time has been given to shepherding the Bearcats’ expansion from the NAIA to NCAA Division II.

With a wide-open offense and defense led by All-Americans Lucky Baar and A.J. Wentland, McKendree has won 20 of their last 25 games. And with marks of 8-2 in 2015 and 8-3 a year ago, the Bearcats claimed their second straight top three finish in the Great Lakes Valley Conference.

But in 2017, Babcock and the Bearcats coaching staff are pressing the next step.

In order to take McKendree’s program to be a perennial NCAA Division II Top 25 contenders, the Bearcats must qualify for the playoffs on a regular basis.

“Finishing with 8-2 and 8-3 records, those are tremendous seasons we’ve had the last two years. But in NCAA Division II football, those types of records aren’t going to get you into the playoffs,” Babcock said Monday. “To get into the playoffs, you have to either win the conference — in our case the GLVC — or you have to have a good enough record to get an at-large playoff berth.

“The last two years we’ve been close. But there are a number of teams in the country which can say they were close.”

With 14 starters returning — seven on both offense and defense — Babcock and his staff feel the players are in place to take the next step this season — make the NCAA Division II playoffs.

“That’s kind of been our motto this year. We want to take that next step and build upon what we’ve been able to accomplish these last couple of years,” Babcock said. “The comparison I make it to is when you graduate from college, everybody wants that high-paying job right away. But you you have to want it and do whatever it takes to get there.

“It’s the same in football. Every team wants to make the playoffs. But you have to do more than want it. You have to do what you can to make it happen.”

There it is! The #GLVCfb Preseason Poll is now official. Check out the full poll & stay tuned for the official release! #GLVCkickoff pic.twitter.com/a0N0H0EfUL

McKendree — 25-17 under Babcock — opens it 2017 season Thursday in San Angelo, Texas where it will take on Angelo State. The Bearcats, who began their 14-hour bus ride to western Texas on Tuesday afternoon, defeated Angelo State 33-19 at Leemon Field a year ago.

The trip to Texas will be one of three long bus rides the Bearcats will take in the first seven weeks of the season. McKendree, which was 2-3 away from Leemon Field a year ago, will travel to Hillsdale College in Hillsdale, Michigan on Sept 16 and Davenport University in Grand Rapids, Michigan on Oct. 14.

The Bearcats will play their home opener Sept. 9 against Kentucky State University.

“We have to schedule four non-conference games and in order to get points in and to accumulate points for the NCAA Division II poll, you need to play Division II schools,” Babcock said. “It is what it is. The 14-hour bus rides is just something you have to deal with. We’re going to play a very good, athletic team from Angelo State that was beating us when we played them at halftime at our home field last year.

“I’m not big for making excuses. You have to be ready to play no matter where you play.”

The graduation of Wentland and Baar, both three-time first team all-GLVC players, leaves a big gap on defense.

McKendree was picked to finish third in the preseason poll of GLVC coaches. Defending champion Southwest Baptist and Truman State University (Missouri) are the top two picks. Perennial league power the University of Indianapolis rounds out the top four teams.

“We’ve never beaten Indianapolis since I’ve been here,” Babcock said. “SW Baptist is very strong again along with Truman, and I think Missouri S&T got a couple of votes for the preseason Division II poll.

“What I think we have to realize is that every week is a big game. If we want to make the playoffs, we can’t afford to take a series, a quarter or a half off of any game.”

This article is written by Dean Criddle from Belleville News-Democrat and was legally licensed via the Tribune Content Agency through the NewsCred publisher network. Please direct all licensing questions to legal@newscred.com.