Lindenwood hosted No. 8 Indianapolis on Saturday and walked away winners, 34-27 behind a huge performance from Lions’ quarterback Cade Brister.

Here’s how it all went down.

Two weeks ago, we labeled Brister as one of 15 DII football players that don’t get enough attention. After his performance Saturday, that is sure to change.

Brister led the Lions to 28 unanswered points in the second and third quarters, throwing for three touchdowns and rushing for one more. He erupted for 531 yards passing and four total touchdowns, spreading the wealth around his offense. Najee Jackson led the way with 124 yards but was joined by Payton Rose — 121 yards and one touchdown — and Nash Sutherlin — 115 yards receiving, 46 yards rushing, and one touchdown — as a trio of players who crossed the century mark. All-American tight end Erik Henneman finished the day with 94 yards receiving.

The Greyhounds entered Saturday’s action No. 1 in scoring offense in DII football at 50 points per game with the seventh-best rushing offense in football, averaging 284.6 yards per game and scoring 26 touchdowns on the ground. The Lions defense held UIndy to 27 points while holding that rushing attack to just 165 yards.

Lindenwood held UIndy’s star running back Al McKellar out of the endzone for the first game all season. The defense also bottled McKellar up for just 71 yards, tying his season-low. It was the first time in three weeks McKellar rushed for less than 124 yards.

Perhaps most impressively, UIndy jumped out to a quick 10-0 lead on a pick-six and field goal, but the Lions defense clamped down and allowed the offense to do their thing.

The Lions victory ends the Greyhounds’ undefeated season. Lindenwood — now 6-3 — has a winning record, so UIndy shouldn’t drop too low, but there isn’t much room for any more error in a stacked region. At 7-1, a second loss over the next two weeks would not fare well for UIndy.

UNDEFEATED TRACKER: Follow every perfect team, and what they have left

Lindenwood, unfortunately, won’t improve its postseason stock with three losses already on its schedule, but it can hold its head high. It is the second time in the past month that a nationally-ranked team came into Hunter Stadium and left without a win. The Lions defeated Truman State 28-24 on Oct. 12 and have certainly left their mark on the region. 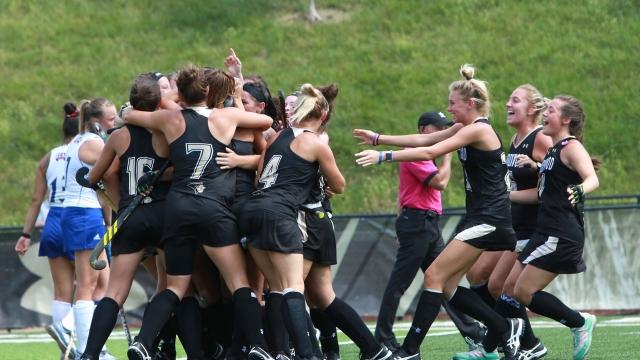 Lindenwood upset No. 3 Saint Anselm in DII field hockey on Sunday snapping over 559 minutes of shutout play by the Hawks. Here’s how it went down.

No. 1 ranked Penn State holds the top three positions for most dominant in Division I. Bo Nickal is first for the Nittany Lions by producing 5.38 average team points per match, followed by Jason Nolf (5.23) and Vincenzo Joseph (4.95). Iowa 165-pounder Alex Marinelli is fourth with 4.74 points, while Cornell 141-pounder Yianni Diakomihalis is fifth with 4.67 points.

The No. 1 ranked team in the country is appropriately well represented as four Nittany Lions lead the pack for Most Dominant in Division I. Bo Nickal is first for Penn State by producing 5.33 average team points per match, followed by Jason Nolf (5.16), Vincenzo Joseph (5) and Shakur Rasheed (4.8).