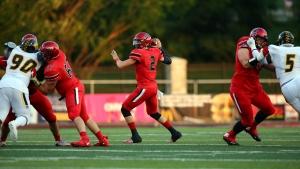 DII football: Here's who stuffed the box scores with the best stats from Week 3


Brook Bolles has the Central Missouri offense rolling. His 500-yard day was just one of the big highlights from Week 3 of the DII football season. Let’s take a look at the best stats from the top 25 and a few outside the DII football rankings that made us pay close attention.

WEEK 3 IN REVIEW: Scores, stats from the top 25

Week 3 saw the usual suspects — like Slippery Rock’s Roland Rivers III and Notre Dame (OH)’s Jaleel McLaughlin — fill up that stat sheets with monstrous days. But there are plenty of new faces that put up big numbers.

Before we get into the best player stats, let’s breakdown the top 25.

2 — Pick-sixes the Harding defense had in less than a minute of the play in the third quarter of its 31-0 victory on Saturday.

3, Part II— Shutouts by the top 25. That’s one more than last week. It’s been eight-straight quarters since Harding has allowed a score — and nine straight without allowing a touchdown — as it posted its second-straight shutout, ending Southern Arkansas’ 17-game home winning streak in 31-0 fashion. Elsewhere, PSAC schools had big days as No. 19 West Chester and No. 11 Slippery Rock both blanked their respective opponents.

7 — Touchdowns thrown by both Indiana (Pa) quarterbacks Saturday. Quinton Maxwell threw for 200 yards and three touchdowns before Jalen Reese came on and threw for 189 yards and four touchdowns.

23.7 — Average margin of victory for the 23 winning teams, the lowest total of 2019. Wingate had the narrowest margin of victory, coming back to defeat Carson-Newman by two, while Indiana (Pa)’s 63-point win over Lock Haven was the largest of the week.

The Falcon Bowl — the game when the Notre Dame Falcons and Fairmont State Falcons get together — was a shootout. Fairmont State’s quarterback Takwan Crews-Naylor had a big day (364 yards passing and four total touchdowns) while running back Khalik Hamlin ran for 126 yards and a touchdown and receiver Aaron Lewis pulled in 141 yards and two touchdowns through the air.

California (Pa) won big and there were plenty of big stats to go with the victory. Quarterback Noah Mitchell threw for 289 yards and four touchdowns mainly to a duo of receivers as Jordan Dandridge (107 yards and two touchdowns) and Tyson Hill (101 yards and one touchdown) both eclipsed the century mark. Nelson Brown added 105 yards and two scores on the ground.

It’s time to pay attention to Charleston (WV)’s quarterback Brant Grisel. He chucked it for 442 yards and three touchdowns on Saturday, hooking up with one of DII football’s best receivers thus far — Mike Strachan — for 180 yards and two touchdowns.

Mars Hill quarterback Jimmy Urzua tossed it for over 400 yards with three scores. Craig Rucker — a perennial All-American threat at receiver — erupted for 185 yards while Javon Harbison added 102 yards receiving and a score.

Shepherd’s Tyson Bagent is making a case for some Harlon Hill love. He had another huge day, throwing it for 394 yards and five touchdowns. Dylan Brewer reeled in 164 of those yards and one score.

Adams State had a duo of running backs eclipse the 100-yard mark in a big win. Jaquez Fredericks toted the rock for 155 yards and two scores while Duson Sproles added 138 yards on the ground. Sioux Falls did the same as Ja’tai Jenkins (102 yards, one touchdown) and Thuro Reisdorfer (113 yards, four touchdowns) had big days on the ground.

Here’s who else stood out from outside the DII football top 25.