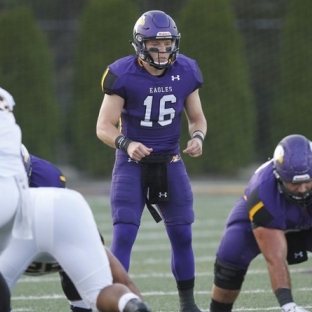 It was just another day at the office for Ashland’s Travis Tarnowski. Already the program’s all-time leader in touchdown passes, the senior quarterback entered Week 3 of the season against Northwood needing just 287 yards to become the Eagles all-time leading passer.

So he threw for 339 yards. All in the first half. Another win, another record-setting day in his illustrious Ashland career. The Eagles won the game 42-14, not only giving Tarnowski his record, but Eagles’ head coach Lee Owens his 100th win.

“I thought it would be pretty cool to get both of those in the same game,” Tarnowski said. “Especially for Coach Owens, a guy that works as hard as he does and gets us going every week. When me and Coach Owens were talking about it at halftime, I realized I played with a lot of great players. I had a guy who caught a lot of yards and touchdowns for me in the NFL right now [Adam Shaheen]. I do the easy part, I get them the ball, they do the rest. Not to mention the guys who play up front and do the dirty work.

“Hopefully now that the record is broken, it sets the bar high for the next guy. Hopefully he can break that, and if that happens, then I know that the program is going to be successful.”

Tarnowski added to his Ashland touchdown record with a five touchdown first half, giving him ten total scores without an interception on the season. With the game in hand, Tarnowski sat out the second half, likely already preparing himself for this weekend’s battle with No. 2-ranked Ferris State.

“Ferris is a great team,” Tarnowski said. “We see what they do to their teams. They are a pretty veteran team, we know that they have experience. They’re fast, athletic and a really skilled team. It’s definitely been highlighted on my calendar the whole time. Maybe I’m going to have to do that one extra thing to beat them. They’re probably the best team in [DII] right now.”

RELATED: Texas A&M-Commerce’s Luis Perez is the most interesting man in DII football

The game will be featured as part of the DII football showcase, streamed live from the Ashland, Ohio campus. While both teams are atop the Great Lakes Intercollegiate Athletic Conference’s elite, it also pits two of DII football’s best quarterbacks against each other. Ferris State’s Reggie Bell is one of the most dynamic quarterbacks in the land, able to attack through the air and on the ground. He certainly has Tarnowski’s attention.

“Well, he runs the ball a little more than I do, so he’s got that over me. But he throws the ball really well, I think he threw four touchdowns last week. I’ve always been a competitor, so if someone comes in and pushes to be the best quarterback, it’s going to push me to want to do better. I like to watch him play, he’s definitely a special player.

“As long as the outcome is the way that we want it to come, that’s all that matters to me. Personal battles are not so much of a thing to me. In high school I did a lot of that and sometimes it got me in trouble. I try to say away from that.”

MORE: Dance moves and hash browns have made Slippery Rock’s Milly Raye the most exciting WR in DII football

Let’s go under the helmet and find out more about Ashland’s all-time leading quarterback.

Favorite NFL team: I’m from Cleveland, so I have to say the Browns. Recently though, the Chicago Bears just because [Shaheen] plays for them. Also [Mitch] Trubisky, we actually played against each other in high school.

#GLIACFB Player of the Week

Favorite player: Drew Brees. He’s the reason I wear eye black in games. I would say he’s Top 5. I know everyone says Super Bowl rings are how you measure a quarterbacks success, but he has a lot of good records.

What’s in your headphones: I try and stay calm. I listen to guys like Kygo and Post Malone. I can’t get too high or too low before games, I’ll be throwing the ball all over the place. I’m always nervous before a game. I can’t be like a linebacker and listen to some crazy stuff and just go out there and run into someone.

Superstitions: Like I said, I always wear the eye black. I wear a bunch of wristbands. I tape my wrists and wear them over the tape. My mom hates it, she always says she’s going to cut them off.

Pregame meal: On road trips we have our snacks at night, and I always take an extra Snickers, because I always eat a Snickers on game day when I wake up. Last year, me and Adam would always get hibachi and watch football together.

Favorite TV show: Definitely Game of Thrones. When I watch with my friends from home, they all said I was Jon Snow from day one. I was always attached to him.

Favorite cartoon: That’s tough. I got to go SpongeBob. I was thinking when I was younger, maybe Rugrats, but it’s definitely SpongeBob.