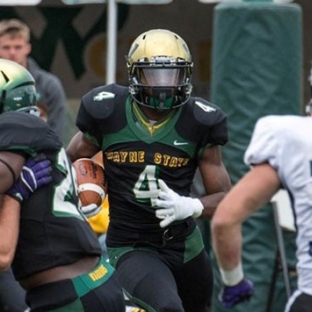 Deiontae Nicholas had to learn to relax if he wanted to return kicks for Wayne State.

Nicholas, now a senior, used to get “so psyched up and so tense” early in his career, Wayne State coach Paul Winters said.

Nicholas went from averaging 16.4 yards on kickoff returns in 2015 to 25.4 per return in 2016. He readies himself by singing “If I Ruled the World” by Nas in his head. The song reminds him of his mother, Cicely Nicholas, a nurse in Columbus, Ohio, who used to listen to the song when he was younger.

“The idea of that song allows him to relax,” Winters said.

Nicholas is among the players expected to make an impact this season for Wayne State, which finished 7-4 in 2016.

He had 87 touches in 10 games between rushing, receiving and kick returns. He set a school single-season record for kickoff return yards (712) and ranked 46th in NCAA Division II all-purpose yards per game (134.45).

He hopes to make a greater impact this year.

“I think my role will be more valuable to the team,” Nicholas said. “I know the more I’m in the game the better chance we have to win.”

Part of the reason Nicholas, a first-team all-league kick retuner, hasn’t received more touches in the past is the depth the Warriors have in the running game. They Warriors return all three of their top running backs from 2016.

“We’re probably as talented at the position as we’ve ever been,” said Winters, who is entering his 14th season and led the Warriors to the NCAA Division II championship game in 2011.

#FridayFeeling after the first week of #WarriorFB practice is in the books! pic.twitter.com/q7lCFldGHL

Romello Brown, the team’s workhorse, averaged 7.1 yards per carry and rushed for 1,572 yards and 16 touchdowns in 2016. Demetrius Stinson had 528 rushing yards and 12 touchdowns.

“On the outside you would think it’s kind of hard,” Nicholas said of being part of a crowded backfield. “But we all feed off each other. We all make each other better.

“Romello is kind of hit-you-in-the-mouth (style). Demetrius is kind of a mix of both. He can run guys over, but he’ll juke you out of your shoes. I consider myself more like a scatback, pretty quick.”

Nicholas scored five touchdowns last season: two rushing, two receiving and one on a kick return. Along with his rushing numbers, he caught 10 passes for a whopping 301 yards.

Nicholas broke a 65-year-old school record with a 97-yard kickoff return for a touchdown against Walsh last season.

“He actually forced two fumbles on punts that we recovered inside the five-yard line,” Winters said. “He’s a tremendous player.”

MORE: West Florida busts out all the moves in post-practice dancing showdown

Winters wound up recruiting Nicholas’ younger brother, Myke Ford, who is a freshman receiver this year.

“We have a relationship that goes deeper than this football team,” Nicholas said. “I help him out with life here, school, situations outside of football. It’s just easy to talk to him. We have deeper bonds than anyone else on the team.”

Winters had a simple reason for why he recruited Ford:

“You turn on the tape of his brother in high school and he really looks like Deiontae,” Winters said. “And if I can get five more Deiontaes I’d take them.”

This article is written by George Sipple from Detroit Free Press and was legally licensed via the Tribune Content Agency through the NewsCred publisher network. Please direct all licensing questions to legal@newscred.com.