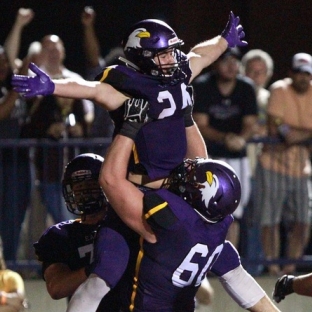 THE TURNING POINT: Ashland scored 10 points late in the second quarter to take a 13-3 lead into halftime.

STAT OF THE GAME: The Eagles held NCAA Division II’s total offense leader (645.0 ypg.) to 228 yards in the victory.

Jack Miller Stadium/Martinelli Field has been open for business since 2009.

Ashland University’s football team has won 38 games at home since then, but the one the Eagles earned on Saturday (Sept. 23) night might rank at the top. Playing the No. 2-ranked team in NCAA Division II, Ferris State, Ashland came away with a hard-fought 20-3 victory.

Winning a nationally-televised game which had ramifications three ways – in the Great Lakes Intercollegiate Athletic Conference, regionally and nationally – the Eagles improve to 3-1 overall and 2-0 in the league. Ashland is tied with Tiffin in the GLIAC standings, just a half-game behind Grand Valley State for first place.

“I told coach (Tim) Rose after the game,” Ashland head coach Lee Owens said of his defensive coordinator, “he’s painted some Picassos in his time here that are just beautiful. But that painting tonight was amazing.”

“It’s a great victory,” Prater Jr. said. “It’s a great win. We trust in coach (Rose). He is a wild man, and I have so much respect for him. His game plans are on point.”

Senior cornerback Dale Irby and freshman corner Colton Paul each intercepted passes, while sophomore inside linebacker Clay Shreve recovered a fumble, as the Eagles finished the night at plus-three in the turnover battle.

Both teams traded field goals early on – senior Aidan Simenc’s 34-yarder for Ashland and Wyatt Ford’s 42-yarder for FSU. The tide turned late in the second quarter, when Tarnowski found junior linebacker-turned-fullback Cameron Barker for a 3-yard scoring pass with 4:28 left until halftime.

After Shreve recovered a fumble on the ensuing kickoff, Simenc hit a 24-yard field goal to put Ashland ahead 13-3 going into the locker room.

The game’s final score came early in the fourth quarter, when junior tailback Andrew Vaughn cut back from left to right for a nine-yard TD run.

On Ferris State’s final five drives, it gained a total of 21 yards on 15 plays.

“We just took over the game,” Owens said. “There were some guys on our defense that they just couldn’t block.”

Ashland extended its regular-season home winning streak to 19 games with the victory.

Prior to Saturday night’s game, Owens was honored for his 100th win with the Eagles in Week 3 at Northwood. At halftime, the 1997 Ashland Division II playoff team was recognized.