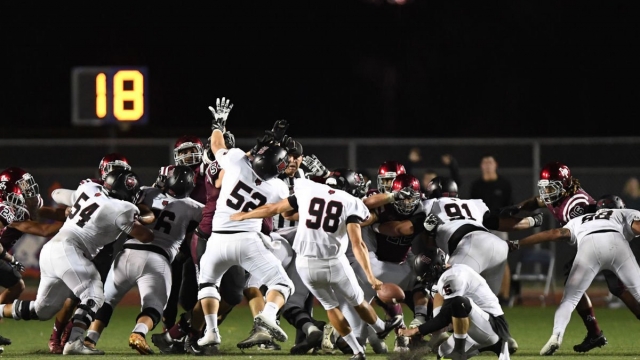 Not much change occured at the top of this week’s Division II football poll. The bottom half of the poll, however, saw a bit of a shakeup.

Let’s take a look at some risers, newcomers and familiar faces in this week’s takeaways from the DII football poll.

Northwest Missouri State extended its winning streak to 33-games this weekend. The Bearcats are now 3-0 on the season, posting shutouts in two of their three victories.

NWMSU is allowing a stingy 173.7 yards per game, which ranks first in DII football. The defense has also allowed just 14 points on the season, already outscoring its opponents by 53 points.

The defense’s big play has been needed early on as new senior quarterback Zach Martin acclimates himself under center. Martin has thrown for less yards in each consecutive game since his opening 314-yard performance, but at the same time has become more accurate and efficient. He is settling in as the field general the Bearcats need.

Northwest Missouri State is just seven wins shy of the DII football record, so every game is a big one in the battle-tested Mid-America Intercollegiate Athletics Association.

It shouldn’t come as much of a surprise that there was little movement at the top this week. The Top 13 teams are a combined 33-2.

No. 11 Colorado Mesa had perhaps the most thrilling victory of the season, defeating Colorado School of Mines 38-36. A combined 36-point, back-and-forth final quarter saw the Mavericks hold off one of the most potent offenses in DII football, winning on a last-second field goal.

Led by running back Nate Gunn’s 229-yard rushing performance, No. 8 Minnesota State defeated Northern Sun rival, and then-No. 20 Minnesota Duluth, in convincing fashion 38-23. The win pushed the Bulldogs out of the Top 25 and makes the NSIC South Division quite interesting with No. 7 Sioux Falls and the No. 8 Mavericks tied at 3-0.

In other Top 13 big matchups, North Alabama was able to hold off Valdosta State 30-24, while Texas A&M-Commerce defeated upstart Eastern New Mexico 51-22 in a game that saw quarterback Luis Perez go off for five touchdowns in the first half.

Indianapolis pulled of an opening night upset and hasn’t stopped, working its way up to No. 14. The Greyhounds moved to 3-0 with a big 45-17 victory over Great Lakes Valley Conference-favorite Southwest Baptist. This was UIndy’s first comfortable win of the season, winning its first two games by a combined seven points. The GLVC is now theirs for the taking.

Arkansas Tech once again climbed the rankings, jumping three spots to No. 16. The Wonder Boys sit at 3-0 after defeating Oklahoma Baptist in their biggest victory of theseason, 58-21. Quarterback Ty Reasnor erupted for 264 yards and four touchdowns, with wide receiver Tevin McKenzie on the receiving end of three of them. Tied atop the Great American Conference with Southeastern Oklahoma State, Arkansas Tech faces 2-1 Southern Nazerene this week. If they can get to 4-0, it may just be time to believe in the Wonder Boys.

Central Washington jumped three spots to No. 20 this week. They knocked then-No. 22 Azusa Pacific out of the Top 25 on a last-second field goal, winning 17-16. The Wildcats may now be the team to beat in the Great Northwest Athletic Conference.

Big riser of the week

Delta State was projected to finish sixth in a stacked Gulf Coast Conference featuring perennial ranked teams like North Alabama and Valdosta State. The Statesmen moved to 3-0 this past week, knocking then-No. 17 West Georgia out of the Top 25 and jumping seven spots to No. 17.

It was a gritty win by the Statesmen, defeating the Wolves 17-7. The defense held West Georgia to just 281 yards and seven points in a statement victory.

Running back Chris Robinson has made Delta State a real contender. He already has Gulf South Conference best 302 yards rushing along with four touchdowns. The Statesmen need to continue building momentum before they hit a tough October stretch that sees them face Valdosta State and North Alabama in consecutive weeks before traveling out of conference to face off against a North Greenville team that just upset then-No. 16 Albany State.

Four new teams entered the Top 25 this week. Humboldt State is making its presence felt in the GNAC. A week after upsetting then-ranked Azusa Pacific, they exploded for a 72-14 victory over Simon Fraser. The win sees the Jacks enter the poll at No. 22 this week.

Bowie State continues to put up some serious points. A week after upsetting ranked Winston-Salem State with a season-low 31 points, the Bulldogs dropped 66 on St Augustine’s. They have now outscored their opponents 145-40 en route to a No. 23 ranking.

Assumption and Catawba enter the poll at No. 24 and No. 25 respectively. Catawba enters the polls just in time, as the Indians are part of this week’s DII football showcase on ESPN 3.

Three weeks in and no conference has yet to pull away with any superiority in the rankings. Both the Pennsylvania State Athletic Conference and the MIAA held tight at three teams apiece, while seven conferences added two teams to the mix. The Northeast-10 added a team to the mix as Assumption joined LIU Post in the Top 25.