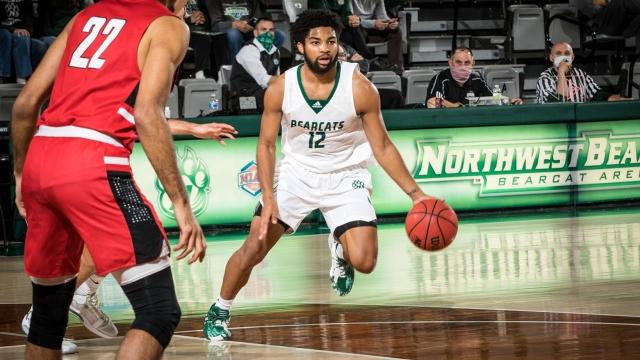 The latest NABC poll for DII men’s basketball was released Tuesday afternoon. Outside of the top three, which remained the same, there was some serious shuffling going on.

Here are NCAA.com’s takeaways and analysis for this week’s Top 25.

Colorado School of Mines remains No. 1 amid three-week layoff

The top-ranked Orediggers haven’t played since Jan. 4, when they held off Black Hills State for an 85-83 overtime victory. Their last six games have either been postponed or canceled. Colorado School of Mines’ next scheduled game is Saturday, Jan. 30, when it hosts Adams State at 9 p.m. ET.

But once the Orediggers return, they’ll do so with the second-best scoring defense in DII. They’re holding opponents to just 59.6 points per game. Opposing teams shoot 38.1 percent from the floor against Mines, which is the fifth-lowest in the country. Don’t forget the club’s 8-0 record and that three of its starters average double figures in scoring. This is still the team the beat.

Both the Wolves and Bearcats went 2-0 last week to preserve their second and third rankings, respectively.

Northern State’s scoring margin of 15.6 is the eighth-highest in DII. Forward Parker Fox is coming off a 21-point, 21-rebound performance in the Wolves’ 81-72 win over St. Cloud State on Saturday. He’s also shooting a whopping 61.5 percent from the floor this season. Nobody in DII that has taken at least 100 field-goal attempts has a higher percentage than Fox.

Northwest Missouri State continues to roll, having won five straight by an average of 15.4 points per game. Remember, the Bearcats’ only loss this season was to then-No. 5 Washburn in overtime 84-82 back on Jan. 7. Trevor Hudgins missed what would’ve been a game-winning 3-pointer at the buzzer. That’s how close the Bearcats are to being 11-0.

Not that 10-1 is anything to sneeze at. Keep in mind that Northwest Missouri State’s two leading scorers combine for 39.9 points per game. Ryan Hawkins averages 20.6 on 51.3 percent shooting while Hudgins is right behind him at 19.3 on 52.5 percent. In fact, Hudgins is in 50-40-90 territory, shooting 49.2 on 3-pointers and an even 90 percent from the free-throw line.

The Hilltoppers suffered their first loss of the season last Wednesday, falling to unranked Concord 91-83. Those 91 points were the most surrendered by West Liberty this year. Lincoln Memorial, Colorado Mesa and Findlay won all of their games last week to surpass the Hilltoppers. West Texas A&M and Truman State were idle, but also rose thanks to West Liberty’s defeat.

Only one new team joined this week’s Top 25. Lee (TN) comes in at No. 24, having won seven in a row after beginning the season 0-1. Two of its victories came against then-No. 5 Valdosta State back on Jan. 15 and 16. Those remain the Blazers’ only losses. The Flames have also held opponents to just 65.9 points per game this year.