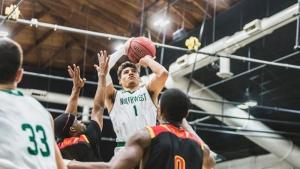 
Trevor Hudgins saved the day, keeping Northwest Missouri State’s 17-game winning streak alive with a buzzer-beater against No. 17 Missouri Southern on Thursday, Feb. 21. That kept the Bearcats locked in on the top spot in this week’s Power 10 heading into the final week of the regular season.

Before we get started on the latest Power 10, here’s a reminder that we’ll also look at those regional rankings. Whereas the past four weeks, I’ve been predicting the No. 1 seed, we’ll take a look at how I did and the one team each current No. 1 has to have their eyes on for the regional tournaments.

Let’s remember: These are my picks, and mine alone. I base them off several categories that the DII men’s basketball selection committee will use come NCAA DII tournament time such as — but not limited to — ranked teams beaten, record against winning teams, strength of schedule and average scoring margin. That means my Power 10 and regional rankings could have slightly different looks as the regional rankings are more of a season outlook while the Power 10 is more in the now.

Here are your latest Power 10 rankings, followed by the final release of my top seeds in each region.

(Note: All records and stats through games played Sunday, Feb. 23.)

No. 1 Northwest Missouri State |26-1| Previous: 1
Trevor Hudgins is playing the best basketball of his young career and that makes the Bearcats really dangerous. His impressive game-winner took down MIAA rival and nationally-ranked Missouri Southern for the second time in a week. The Bearcats have shown they can blow out the best competition in DII and take it to the wire, winning every way possible. They look like a real contender to repeat as national champions.
This week: Feb. 25 at Missouri Western; Feb. 27 vs. Washburn

No. 2 Lincoln Memorial | 27-1 | Previous: 2
What else can be said about the Railsplitters? This team is on absolute fire, dropping 100 points with relative ease on a weekly basis. Over the past seven games, they are outscoring their opponents 100.3-76.9. Lincoln Memorial is playing its best basketball of the season at the right time. It would take the upset of upsets to not see this team in the Elite Eight.
This week: Feb. 26 vs. Tusculum; Feb. 29 vs. Anderson (SC)

ALL-STATS TEAM: The DII men’s basketball players who couldn’t be stopped, so far

No. 3 West Texas A&M | 27-1 | Previous: 3
The Buffs have reeled off 18 in a row and picked up a 21-point win over a Texas A&M-Commerce team that has given nationally ranked opponents fits all season. The only downside to Qua Grant and Joel Murray being on the same team is that they’ll likely cancel each other out in the national player of the year voting, that’s how good the two have been all season long.
This week: Feb. 27 vs. Midwestern State; Feb. 29 vs. Cameron

2020 TOURNAMENT: Get your bracket | How the tourney works

No. 4 UC San Diego | 26-1 | Previous: 4
Another winner of 18 in a row, the Tritons are heads and shoulders above the rest of the California Collegiate Athletic Association one week before the conference tournament starts. Tyrell Roberts has really helped to pace this offense all season long. He last scored in single digits way back on Nov. 24, the only time he hasn’t scored 10 or more points this year.
This week: Feb. 29 at Cal State San Marcos

PLAYER-OF-THE-YEAR WATCHLIST: Keep your eyes on these DII superstars

No. 5  Florida Southern | 24-2 | Previous: 5
The Mocs just keep rolling, winners of 12 in a row. Florida Southern only had one game this week, but the Mocs broke the century mark for the third time in their past four games. This is a team that continues to get better as the year progresses, which is a frightening thought. Six players are averaging double figures in points and Brett Hanson and Jaylin Hinton are DII college basketball superstars.
This week: Feb. 26 at Tampa; Feb. 29 at Palm Beach Atlantic

No. 6 Azusa Pacific | 23-3 | 6
Guess what? The Cougars have won 18 in a row and this is just starting to get weird. But it also makes for one heck of a West Region with UC San Diego right there in the Power 10. Perhaps the only downside to the end of the regular season is Azusa Pacific is on the road — where they are 7-2 — for their final two games this year. The Cougars haven’t played a close game in a couple of weeks and Selom Mawugbe continues to make you say wow in every start.
This week: Feb. 24 at Holy Names; Feb. 29 at Concordia (CA)

No. 7 Indiana (Pa) | 23-2 | Previous: 8
The Crimson Hawks have not won 18 in a row, but they are the cream of the crop in the Atlantic Region. IUP is back on track after an early February loss to Mercyhurst and the offense looks like it’s gelling. While Armoni Foster and Malik Miller are special talents and playing some of their best basketball, IUP has a pretty deep six-man rotation that could prove tricky this time of year.
This week: Feb. 126 at Clarion; Feb. 29 vs. Pitt-Johnstown

TOURNAMENT TIME: 6 programs that could send their men’s and women’s teams to the DII Elite Eight

No. 8 Indianapolis | 21-5 | Previous: NR
The Greyhounds have won six straight but have been impressive all season long. They have put up a 20-win season against the 17th-toughest schedule in all over DII men’s basketball. UIndy has played ranked opponents well this season, and despite a few losses, have signature wins over Grand Valley State, Southern Indiana, Bellarmine and Truman. The Greyhounds have a big regional matchup against Southern Indiana this week that can add to their impressive resume even more.
This week: Feb. 27 vs. McKendree; Feb. 29 at Southern Indiana

No. 9 Jefferson | 24-2 | Previous: 9
The Rams keep winning, and though they haven’t played the toughest of schedules, 17 in a row is an impressive feat. Bridgeport took the No. 1 spot in the first rankings despite Jefferson handing the Purple Knights an early-season 76-58 loss. You can make a strong case for several teams in this next two spots, but Jefferson hasn’t given me a reason to move it off the nine spot with a 24 win season.
This week: Feb. 26 at Goldey-Beacom; Feb. 29 vs. Holy Family

No. 10 Valdosta State | 22-3 | Previous: NR
Welcome the Blazers back to the Power 10, a spot they haven’t seen since early December. That’s when Valdosta State lost three out of five games, including a tough one against Florida Southern. The Blazers haven’t lost since and have two very winnable games to close out their Gulf South Conference slate. This is a tam with five players scoring in double figures a night on a 15-game winning streak. That’s not a bad place to be this time of year.

Let’s take a look at the No. 1 seeds, how they matched up with my predictions and who they need to keep tabs on heading into the NCAA DII tournament regionals.