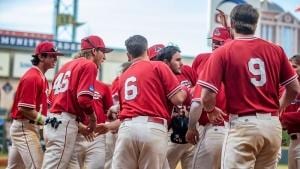 
Central Missouri and Angelo State sure made it tough this week in putting together the latest DII college baseball Power 10 rankings. But after the Mules third straight perfect weekend, there is a changing of the guard as Central Missouri ascends to No. 1 for the first time this season.

ICYMI: Check out how the Power 10 looked last week

Before we get into the latest DII baseball Power 10, here’s a quick refresher if you’re new to the rankings. These are my rankings. I use much of the criteria the DII baseball selection committee will use come tournament time, including — but not limited to — strength of schedule, head-to-head matchups, and record against DII opponents. We finally have every team playing baseball, so the top 10 can start to take its actual shape after weeks of waiting.

LOOK BACK: 5 storylines you may have missed on DII baseball’s opening night

No. 1 Central Missouri | 18-3 | Previous: 2
You could tell me I am too harsh on dropping Angelo State after its first .500 weekend of the season and you’d be right. The Rams and the Mules are without question the elite of the Power 10, but a 12-game winning streak slides the Mules to the top spot. Get to know Cole Taylor who has been unworldly as of late: over his last five games he has 10 hits, a home run in each one of them and 10 RBIs.

No. 2 Angelo State | 19-3 | Previous: 1
The Rams drop from the top spot but I don’t expect them to be gone for too long. The Mules and Rams battles atop the Power 10 should be fun throughout the season. Angelo State split its first weekend series of the season — and still hasn’t lost one. The offense still runs the show in San Angelo and my weekly “did you see what Josh Elvir did” blurb continues: he homered in consecutive games to close the weekend and now has 11 this season.

8 FOR CARY: A way-too-early prediction for the 2020 DII baseball championship finals

No. 3 UC San Diego | 17-4 | Previous: 6
Yes, I’m still very high on the Tritons and a 4-0 weekend scoring 54 runs certainly isn’t going to change that. Shay Whitcomb’s five-game hitting streak — in which four games were of the multi-hit variety and one was a three-home run performance — came to an end, but he has started to look like the MLB draft prospect he has been touted to be. Brandon Weed and Cameron Leonard will make it hard for anyone to take a weekend series from the Tritons.

No. 4 Colorado Mesa | 14-4 | Previous: 8
The Mavericks are always a team I am higher on than most as well, and they too pumped out a 4-0 weekend. They head to Golden, Colorado, for a showdown with the Colorado School of Mines in what should be a great weekend series. The starting pitching outside Trevin Reynolds still needs to show consistency, but the bats are alive and well and this team always gets hot. We may just be seeing what they are fully capable of doing.

No. 5 Tampa | 13-7 | Previous: 4
A rather ho-hum week for the Spartans, but they closed strong and don’t slip too much. There is a lot to like in the rotation with Brandon Knarr striking out 16.30 per nine and Braydon Nelson with a 2.15 ERA through six appearances. Jacinto Arredondo is a confidence booster at the back of the bullpen as well. The bats need to get going, but as long as Tampa keeps winning two or three games a week, we know it will be a force come the end of April.

No. 6 North Greenville |17-5-1 | Previous: 3
The Crusaders had their first bad weekend of the season, and you could argue they should drop a little bit further, but I still see plenty to like. As a team, North Greenville is hitting .343 with 27 home runs and 185 runs scored with six everyday players hitting .350 or better each with an OPS above .900. If this pitching staff finds consistency, watch out. The Crusaders of course play in a very tough region, so they need that pitching to come along much sooner than later.

No. 7 Catawba | 17-3 | Previous: 7
Speaking of that tricky region the Crusaders are in, coming in right behind them is the team that knocked them out of the 2019 Super Regionals. The Indians finally saw their 15-game winning streak come to an end but responded with a 19-4 shellacking the very next day. This team is deep, as Greg Brown joins Hunter Shepherd as dangerous weapon in the rotation while Bryan Ketchie’s experience makes a solid third starter. Shepherd continues to star in the offense as well, hitting .442 with six doubles and seven home runs.

No. 8 Minnesota State | 6-3 | Previous: NR
Last week I said that the Mavericks have talent to be a top-10 team but simply hadn’t played enough for me to have them here. Well, they just had an impressive week in Florida, losing to a very good Gannon team in 11 innings, but then winning the next three, including wins over St. Cloud State and Power 10 contender Ashland. Two-way star Cam Kline isn’t even at his best just yet and this team looks like it can hang with the best of them. This may be a bit aggressive, but the Mavericks are a solid bunch.

No. 9 Georgia College | 13-2 | Previous: 9
The Bobcats just keep going, putting up another series win last week. The team has a .930 combined OPS if that tells you how well they are hitting and three of the four regular starters still have ERAs under 2.50. This team has tested itself early and is setting itself up nicely for some pretty stiff competition the next three weekends, especially that March 20-22 showdown with Columbus State.

Mount Olive took a plunge this week, losing a series to a Barton team I felt they should take. That said, early season losses don’t mean a team is anywhere near bad and Mount Olive has plenty has plenty to like on the mound and at the plate, they just need some more big wins. And that’s why Ashland hangs on to its spot in the Power 10 for me. Yes, the Eagles lost by one run to the newly-entered Minnesota State Mavericks, but I think they’ve played a solid schedule and are still coming out ahead. There is a ton of experience from last year’s run to the finals and it shows.

Still on the radar: Delta State, Mercyhurst, Newberry and New York Tech fell out of the rankings last week, but all four of these teams had solid weeks. They are very much in the conversation.