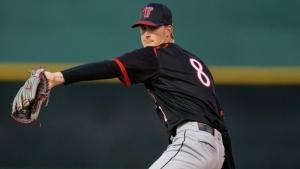 
We have played four weeks of DII baseball and Angelo State refuses to lose a ball game. The Rams hold the top spot, but two familiar faces return to the Power 10 this week.

First, a quick refresher if you’re new to the DII baseball Power 10. These are my rankings. I use much of the criteria the DII baseball selection committee will use come tournament time, including — but not limited to — strength of schedule, head-to-head matchups, and record against DII opponents. We finally have every team playing baseball, so the top 10 can start to take its actual shape after weeks of waiting.

LOOK BACK: 5 storylines you may have missed on DII baseball’s opening night

No. 1 Angelo State | 14-0 | Previous: 1
This is a wild start for the Rams. We knew they would be good, but this is on another level. This offense looks unstoppable, but a big showdown against West Texas A&M this coming weekend will be a great test. Josh Elvir is simply remarkable, now hitting .522 with seven doubles, nine home runs, 27 RBIs and a mind-boggling 1.928 OPS. The whole lineup is clicking, hitting a combined .395 as a team with 23 home runs.

No. 2 Colorado Mesa | 8-2 | Previous: 2
Baseball is a weird sport to rank in the early season because losses don’t hurt you as much as in other sports, especially in the grand scheme of 50-game seasons. So, yes, the Mavericks dropped a game this past weekend to Northwest Nazarene, but I was high on this team coming into the season and they have yet to disappoint. Let’s not forget, Mesa opened against back-to-back nationally-ranked teams and came out 5-1. Haydn McGeary, a name you’ve heard and will continue to hear me mention, had a four-home run weekend and you feel like this lineup is just getting started.

8 FOR CARY: A way-too-early prediction for the 2020 DII baseball championship finals

No. 3 North Greenville |13-2-1 | Previous: 3
The Crusaders played a six-game week and won five of them. That’s impressive as it is right there. They did suffer a midweek loss, but that was by one run to Anderson (SC) in a back-and-forth battle decided in the eighth inning. The offense continues to impress as eight of the nine everyday hitters are hitting over .300. The starting pitching — Christian Ryder, Ethan Garner and Logan Chapman — have been impressive but Ryan Kirk has been lights out at the back of the bullpen, now 2-0 with three saves.

No. 4 Central Missouri | 11-3 | Previous: 4
The Mules finally had their first perfect weekend of the season and it was a big one, defeating Concordia-St. Paul 31-1 over the three-game series. Central Missouri has four pitchers that have made at least three starts and those pitchers — Mason Green, Jordan Fowler, Collin Jones and Jonathan Sprinkle — have a combined 1.28 ERA so far. Mason Green and Jordan Fowler are a vicious 1-2 punch atop the rotation and should continue to set the Mules up for winning weekends to come.

No. 5 UC San Diego | 10-3 | Previous: 5
The Tritons continue to be a baseball factory. The opened and closed their weekend four-game bout against Sonoma State with 20-1 victories and are looking like they could be the West Region team to beat once again. The pitching has been solid and Luke Mattson continues to be a weapon out of the back of the bullpen, but despite those two 20-run performances, this offense hasn’t even started clicking yet. Once Brandon Stewart and Shay Whitcomb get going, this team will be on another level.

No. 6 Mount Olive | 12-2 | Previous: 6
The Trojans lost a midweek matchup to a Catawba team that is very much back on track before sweeping Limestone over the weekend. It’s fair to be concerned with Mount Olive’s two losses coming against top-25 teams, but an opening-day win over Tampa keeps the Trojans ahead of the Spartans for now. JT Stone and Joe Mason continue to tear up the baseball and Hunter Stevens is every bit the ace Mount Olive needs. He’s made three starts, all of which have been complete games.

No. 7 Tampa | 8-4 | Previous: NR
We knew the Spartans would have ups and downs in the early going adjusting to some new transfers and top-of-the-weekend rotation. But this past weekend was a big up, taking down a Florida Southern team that catapulted to No. 5 in the NCBWA poll two games to one in a weekend series. Not only that, the bats were alive beating the Mocs 21-2 in the two victories. A 2-1 start in the Sunshine State Conference is certainly a nice beginning.

No. 8 New York Tech | 4-1 | Previous: 9
Hey there, Bears, welcome to the 2020 baseball season. New York Tech — the team behind last season’s dream run to Cary — made their much anticipated 2020 debut to solid results going 4-1 in Myrtle Beach, South Carolina at the Northeast Challenge. Sure, the Bears dropped a game, but it was the final game of a long five-game weekend, and they utterly dominated Franklin Pierce, Southern Connecticut State and a Wilmington (DE) team receiving votes. Chris Mott and DJ Masuck picked up where they left off, earning wins in the Bears first two games of the season. A big showdown with Southern New Hampshire — a rematch of the 2019 super regionals — awaits this weekend.

No. 9 Ashland | 2-1 | Previous: 7
Another long-awaited debut, the Eagles shook off the cobwebs and finally played some baseball in 2020. Chance Hitchcock — the Eagles’ ace in 2019 — looked sharp in his debut going 6.2 innings of shutout ball striking out six. The bats were pretty quiet this past weekend, so we’ll see how they respond on the road at Southern Indiana.

No. 10 Catawba | 11-2 | Previous: NR
The Indians were in my preseason top 10 and had a disappointing opening weekend at Steinbrenner Field in Tampa, going 1-2. They haven’t lost since, and a midweek win at Mount Olive and a three-game sweep at Tusculum shows they are back on track. Winners of 11 in a row, Catawba is led by two-way sensation Hunter Shepherd who is hitting .469 with six home runs at the plate and is 3-0 with a 1.45 ERA in four starts on the bump.