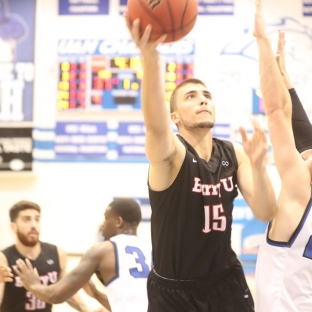 DII basketball preview: 5 teams to keep on the radar

The road to Sioux Falls, South Dakota begins this weekend as DII men’s basketball tips off.

Northwest Missouri State enters the season in the same spot they finished last season. The reigning champs are No. 1 and with the 2016-17 DII Player of the Year Justin Pitts returning, it’s an obvious choice. Queens (NC) is right behind the Bearcats at No. 2. The Royals not only return four starters(Jalin Alexander, Todd Withers, Ike Agusi, and Mike Davis), but they are all seniors loaded with big-game experience.

What about outside the Top 10? Are there any teams lurking in the second half of the rankings that should be considered a threat right out of the gates?

The Bucs wasted little time making their presence felt this season. Barry went into Auburn Arena on November 2 for an exhibition bout against the DI Tigers and left victorious in a 100-95 overtime thriller.

The reigning Sunshine State Conference champs have a bevy of returners, led by All-American guard Elvar Fridriksson (17.4 points, 7.7 assists per game). Forwards Daniel Mortenson (11.1 points per game, 6.2 rebounds per game) and Kenan Guzonjic, who led the team in rebounding at 6.4 per night, return to the starting lineup as well. Guard Sawyer Glick is back, and despite making only one start last season, he appeared in 30 games and was the Bucs fifth highest scorer with 10.9 points a night.

The most intriguing part of this roster is the melting pot it provides. Eight different countries are represented, with players from Australia, to Iceland, to Greenville, South Carolina. Head coach Butch Estes has gotten the most out of his bunch since taking over in 2013 with three-straight 20-plus win seasons. There’s no reason to expect anything less this year.

Last year was a magical season for the Falcons. They won both the Lone Star Conference regular season and tournament titles, and advanced to the NCAA tournament for the first time in program history. Five of the six top scorers from that team return, including four starters.

UTPB will have its hands full in a balanced LSC. A big matchup with No. 21 West Texas A&M awaits on December 5. It is a big early season test to see who has bragging rights in the LSC.

The Wild West Region should be a good one again in 2017-18. Chico State, California Baptist, Western Washington, Dixie State, Western Oregon, UC San Diego and San Francisco State are all either ranked or receiving votes in the preseason poll. While Chico State is the highest, California Baptist may be the one to watch.

Head coach Rick Croy turned the Lancers into a perennial powerhouse. He has one last chance to grab California Baptist a DII basketball championship before it jumps to DI next season and he has the pieces in place to do so.

Congrats to our very own Cory Lange (3-point shootout) and Bul Kuol (dunk contest) on their championships tonight! #LanceUp pic.twitter.com/iReqkKWmbg

Three starters return for the Lancers, including the Preseason PacWest Player of the Year Kalidou Diuof. The 6-foot-9 big man avergaed 15.8 points and 6.9 rebounds per game last season and should be the presence the needed down low. Guard Jordan Heading provides a deep threat, leading the Lancers with 68 3-pointers in 2016-17. Senior guard jason Todd does a little bit of everything well, scoring 8.7 points and 6.7 rebounds per game while shooting 94 percent from the charity stripe.

Senior forward Gabe Taylor could be the x-factor. The DI transfer from Portland brings three years of experience in the West Coast Conference to a highly experience PacWest team. If they all mesh, the Lancers should be a threat to run deep in the tourney.

West Liberty: The Hilltoppers came in at No. 17 in the preseason poll. It is the 112th concesutive poll they have appeared in, not missing one since February 2, 2010. This team is no stranger to the spotlight or big games, plus return one of the best players in DII in Dan Monterosa.

Christian Brothers: Delta State may have been the Gulf South Conference team to crack the Top 25, and could very well become one of the breakout teams of the year. But don’t sleep on Christian Brothers. The Bucs return a pair of All-GSC players in Adam Dieball (17.1 points, 5.7 rebounds and 5.4 assists per game) and Jeff Larkin (17.4 points, 3.3 assists per game) that could cause havoc in the GSC. The conference is surprisingly competitive and Christian Brothers will be put right to the test. The Bucs open their GSC slate at No. 25 Delta State.