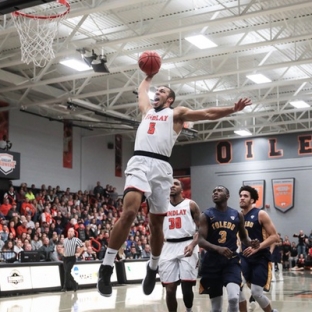 NCAA basketball teams have rallied together, playing exhibition games to raise money for the American Red Cross to aid those affected by the recent hurricances. Division I Toledo and Division II Findlay were two of those teams, meeting up in Findlay, Ohio on October 24.

The best news of the night was the fact that the Oilers and Rockets faithful packed Croy Gymnasium. The teams raised $6,500 in front of 1,215 fans. And those fans were given a show.

OILERS WIN! Findlay takes down the Division I Toledo Rockets in Croy! Oh and $6,500 raised for hurricane relief pic.twitter.com/YYpUw9SRE8

The DII powerhouse — who finished ranked No. 25 at the close of the 2016-17 DII basketball season — defeated the DI program 89-86. The game was a back-and-forth battle, as the Oilers quickly got out to a nine point lead by the half. Toledo came storming back, outscoring its opponents 47-41 in the second half, but fell three points short of an impressive comeback.

The Oilers fans saw five of their student athletes break double-digits in points. No matter if it was exhibition, the fans left happy, the Oilers left victorious and both teams can begin their seasons knowing they did a great deed for those dealing with the aftermath of tragedy.

Share. Twitter Facebook Google+ Pinterest LinkedIn Tumblr Email
Previous ArticleHumboldt State's Ja'Quan Gardner is rushing, receiving and returning his way to GNAC football history
Next Article Maryland basketball: For rebuilding Terps, two weeks of basketball in Taiwan a reminder of what they have