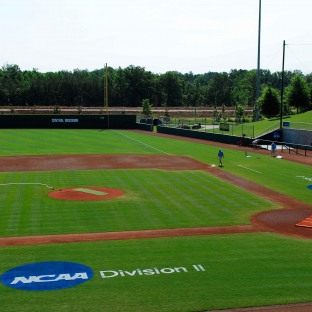 GRAND PRAIRIE, TX. — And then there were four.

UC San Diego and Lindenwood played the matinee. After trailing by six-runs early, UC San Diego came out early and made a statement, scoring five runs in the first two innings. Lindenwood put a scare into them after the third, but the top four hitters in the lineup made sure to put it away.

Jack Larsen, Brandon Shirley, Tyler Durna and Alex Eliopulos combined to go 12-for-19 with nine RBI and seven runs as the Tritons advance.

RELATED: DII baseball journal: a look back at Day 5

The nightcap had to big-hitting teams in Delta State and Colorado Mesa. Instead of fireworks, fans were treated to a pitching duel.

Mesa’s Chris Ramirez and Delta State’s Peyton White were evenly matched through five innings, before a big two-run sixth opened the game a bit for the Mavericks.

Kevan Elcock’s three-run moonshot to left was all that the Mavericks needed. The home run put Colorado Mesa up 6-1, giving Ramirez all he needed.

St. Thomas Aquinas and UC San Diego kick off Thursday’s games at 4 PM. NCAA.com will be live, pregame to postgame, with all the day’s festivities, so stay stay right here for live updates all day long. For now, scroll below for a full recap of Wednesday’s games: