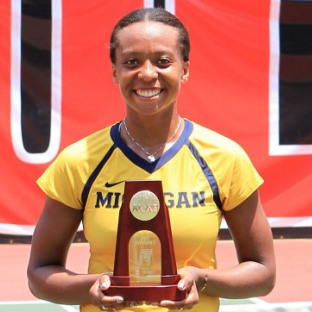 
ATHENS, Ga. –– Sophomore Brienne Minor of the University of Michigan women’s tennis team became the program’s first national champion, defeating Florida’s Belinda Woolcock, 6-3, 6-3, to win the NCAA singles championship Monday (May 29) at Dan Magill Tennis Complex. Minor, who was unseeded in the tournament, reeled off six wins for the title and defeated a trio of top-16 opponents, including No. 6-seeded Woolcock.

Minor won the match’s first four games in breezing to a 6-3 set-one win. The sophomore won a deuce point in the first game, then broke Woolcock’s serve to take a 2-0 lead. Minor won a pair of points at 40-15 to take the 4-0 lead. After dropping a game on her serve, Minor responded by breaking Woolcock for the third time in the match. Woolcock won the next two games, but Minor closed out the set, winning on serve at 40-all.

The Mundelein, Illinois, native claimed the first game of the second set, winning a long rally at 40-30. Minor went up 3-1, rallying to win four straight points after being down 30-0. Woolcock got as close at 4-3 in the second set before Minor won the final two games, earning a break and a winner on championship point.

Minor defeated Texas Tech’s Gabriela Talaba and Vanderbilt’s Sydney Campbell in the tournament, both of whom were 9-16 seeds. Minor ends her sophomore season with All-America honors and a 32-6 record. She is one of six Wolverines to have multiple 30-win seasons in a career.