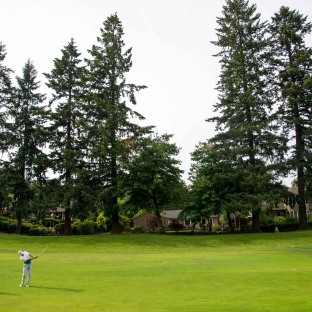 SUGAR GROVE, Ill. – Day 1 of the NCAA Division I Men’s Golf Championship was cut short due to darkness following earlier weather delays, but it had no shortage of excitement.

Vanderbilt, which is among the 15 programs that will need to complete their first rounds Saturday morning, is the clubhouse leader after the first day, carrying a -8 score into the night. That’s two strokes better than Auburn, which completed its first round at -6.

Follow along below for a full roundup of highlights and reactions from Friday’s opening round of championship play:

On Friday (May 26), first round action for 30 teams and six individuals who qualified from six regionals across the country, gets underway beginning at 6:45 a.m. (CT).  Tickets for every day of the NCAA Championships are on sale at the Rich Harvest Farms entrance off of Granart Road and online at NCAA.com.

The entire field will play 18 holes each on Friday, Saturday and Sunday (May 26-28) before the top 15 teams and nine individuals (not on one of those teams) play an additional 18 holes of stroke play on Monday (May 29), after which the individual medalist will be crowned and the eight teams who will advance to match play will be determined. The match play quarterfinals and semifinals will be played on Tuesday (May 30) beginning at 7 a.m., with the team championship determined on Wednesday (May 31).

Golf Channel will have extensive coverage of the NCAA Division I Men’s Golf Championship.  Live coverage begins Monday, May 29 with Golf Central at 2 p.m., followed by the live broadcast of the final round and individual championship from 3-7 p.m. (CT).