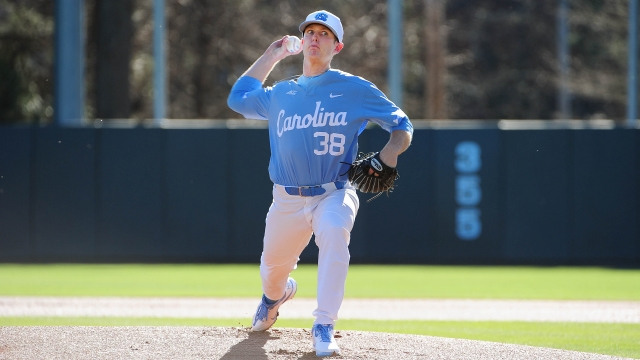 In one month, there will be a new College World Series champion raising the trophy at TD Ameritrade Park. That much is known, after defending champ Coastal Carolina’s early conference tournament exit has resulted in a postseason absence this year.

The road to Omaha starts Thursday for 64 other teams following Monday’s release of the 2017 Division I baseball tournament bracket. These squads are dispersed among 16 loaded four-team regionals, each presenting its own storylines and intriguing matchups. Here are the players to keep your eyes on from the top right side of the bracket.

Pitcher to watch: North Carolina has returned to the postseason after missing out in 2016, and the Tar Heels have done so largely thanks to their bonafide ace in JB Bukauskas. Bukauskas is a power pitcher, despite his smaller 6-foot frame, and is averaging more than 11 strikeouts per nine innings. The junior hurler was annointed ACC Pitcher of the Year, and he lived up to that honor with seven innings of three-run ball in the ACC quarterfinals against NC State. That victory brought his pristine record to 9-0.

Hitter to watch: Davidson had to sweep Saturday’s doubleheader with VCU to punch its first ticket to the tournament in program history. Behind power-hitting first baseman Brian Fortier and an offense that scored 20 combined runs in the twin bill, Davidson did just that. Fortier went a harmless 1-for-5 in Game 1 before following up with a 3-for-5 performance in the clincher. The cleanup hitter doubled and scored the tying run in a five-run fourth inning rally that was the deciding frame. For the year, Fortier is hitting .318 with 15 home runs and 18 doubles.

Pitcher to watch: Houston’s greatest strength is its balanced lineup, but Trey Cumbie has had a standout sophomore season on the mound and is ready for his first taste of postseason baseball. The lefty finished the regular season with 80 strikeouts in a team-high 96 innings pitched in his first year as a regular starter. Four of his 10 wins came in complete games.

Hitter to watch: Freshman Braden Shewmake wasted no time making an impact this season, starting 49 games on the infield for Texas A&M. The Texas native has 27 multi-hit games this year and is slugging .533 with 23 extra base hits. He had a season-high five hits in a game against Pepperdine in February.

Pitcher to watch: A 6-foot-11 force on the mound is always an intimidating sight for batters. That’s just one intangible that Kentucky pitcher Sean Hjelle has in his arsenal. As for his tangibles, he possesses a low-90s fastball and the ability to go off speed with a changeup. The SEC Pitcher of the Year is 9-3 with a 3.87 ERA in his sophomore campaign. Hjelle emerged as the Wildcats’ trusted closer last year and he’s since thrived as their ace in 2017.

Hitter to watch: NC State’s Brad Debo is yet another first-year star looking to shine bright on the national stage. Debo’s stepped right into the starting designated hitter spot and leads the team with a .342 average and .397 on base percentage. He has 21 multi-hit games so far, including 12 against ACC competition.

Pitcher to watch: The “K” counter is always in motion when Xavier lefty Zac Lowther takes the mound. The junior is third in the nation in strikeouts per nine frames (13.44) and he’s reached double digits in four separate games. He struck out a season-high 16 Villanova batters on April 7, when he took a perfect game into the ninth before walking the leadoff batter and watching the bullpen blow a 2-0 lead. Nonetheless, it was one of the greatest outings in program history.

Hitter to watch: Louisville’s Brendan McKay can easily take up both of these spots in his home regional. The nation’s premier dual threat is 9-3 with a 2.37 ERA in 14 starts on the hill while throwing a team-high 91 innings. In the batter’s box, he’s slashing .363/.481/.705 with 17 home runs and 52 RBIs. Four of those homers came in a single game against EKU. Good luck to opposing pitchers and batters alike on this side of the bracket.