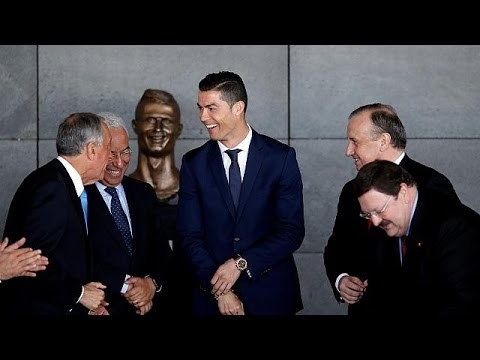 Cristiano Ronaldo Honored By Portugal Airport With Funny Bust, Internet Has Field Day With It [PHOTOS]


Cristiano Ronaldo Honored By Portugal Airport With Funny Bust, Internet Has Field Day With It [PHOTOS]

Cristiano Ronaldo was honored with a bust after an airport in Portugal was named after him. The bust has been the subject of memes on the internet. (Photo : YouTube Screencap)

Not very many professional athletes have had airports named after them, but Cristiano Ronaldo was bestowed that honor when Portugal’s Madeira International Airport was renamed Aeroporto Cristiano Ronaldo. He was also honored with a bronze bust to commemorate the airport’s name change. Unfortunately, it didn’t look anything like him – and the internet expectedly had a field day with it.

As reported by the New York Daily News, Cristiano Ronaldo, who grew up on the island, was on hand for the ceremony where the bust was revealed. “Thank you for being here in my honor,” Ronaldo said. “Seeing my name being given to this airport is something very special, everyone knows that I am proud of my country and especially my home city.” As noted by the report, the decision to rename the airport came after Ronaldo led the Portugal national team to success in Euro 2016.

Fans were quick to photoshop the bust on Cristiano Ronaldo’s head, with one Twitter user wondering what the fuss was about. There was one that wondered if the bust was of Ronaldo or Sloth from “Goonies,” while others sarcastically said that the bust looked exactly like the football superstar. Another pointed out the kind of luck Ronaldo has had when being honored with statues. As pointed out by the Boston Herald, in 2014, the prolific goal scorer was honored with a full-sized statue in Madeira – a statue that inexplicably featured a huge bulge in the groin area.

The new Ronaldo statue looks exactly like him pic.twitter.com/3DqNhBj1Ay

For a very handsome man, Ronaldo has had some appalling luck with statue-makers pic.twitter.com/M74YEDng4c

The island of Madeira has long expressed its pride in being the hometown of the 32-year-old. Apart from the airport, a museum and a hotel have been named after Cristiano Ronaldo as well. Despite the online fun netizens had on his behalf, Ronaldo was cordial on Twitter, saying that he was happy and honored to have the Madeira airport named after him.