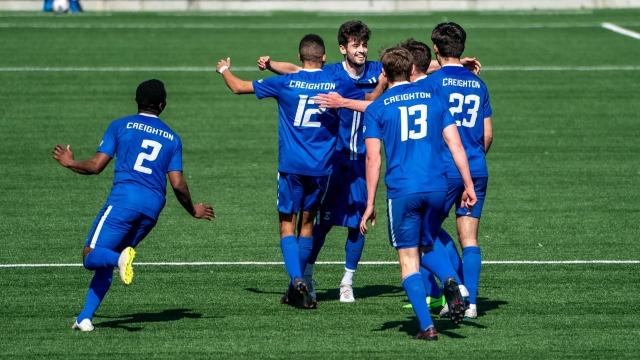 OMAHA, Neb. — The Creighton men’s soccer team earned a 3-0 shutout of No. 1 Indiana on Friday night in Bloomington, Indiana.

The victory also marked the first win for any Creighton athletics program against a team ranked No. 1 since the Creighton baseball team recorded an 11-8 10-inning victory against Nebraska on April 24, 2001.

Seniors Diego Gutierrez and Charles Auguste each scored goals in the first half to give Creighton a 2-0 lead into halftime against the top-ranked Hoosiers.

The Bluejays entered Friday’s match with only one goal scored through their first two matches of the season and was outscored 6-1 during those contests.

Gutierrez found the back of the net just over a minute into the match as Creighton gained an early 1-0 edge on Friday night.

During the second minute of action, the Indiana goalkeeper attempted to clear the ball, but Manu Toledano picked off the pass at the top of the 18-yard box. Toledano blasted a shot that was blocked before Gutierrez recovered the rebound and slotted the ball into the back of the net for his first goal of the season and the Bluejays’ first lead of the season.

SIMPLY THE BEST: The top places to watch soccer, according to fans

The Bluejays added to their first-half lead with a goal from Auguste with exactly two minutes remaining until halftime. The Montreal native finished from nearly 25 yards away after Dominic Briggs sent a pass from the right sideline towards the center of the field. Briggs sent the ball towards Callum Watson who allowed the ball to roll to Auguste who fired the ball into the back of the net.

Indiana attempted seven corner kicks during the first half. During the 33rd minute, the Hoosiers sent a ball towards the back post, but Paul Kruse punched the ball away from the end line.

Creighton did not attempt a corner kick in the opening 45 minutes but held a 7-6 edge in overall shots.

The Bluejays continued to apply pressure and controlled the second half as Creighton fired seven shots and forced a pair of saves before Indiana recorded its first shot after halftime during the 74th minute.

The Hoosiers sent a corner kick from the near side into the center of the box where an Indiana player sent a header on goal before Kruse sent the ball over the net with a leaping save attempt.

The Bluejays ended Friday’s match with an 18-7 edge in shots, including 11-1 in the second half.

Kruse ended the night with three saves to preserve the clean sheet.

Creighton will stay in Bloomington, Indiana for the weekend and face Ohio State in a neutral site contest on Monday at 4 p.m.