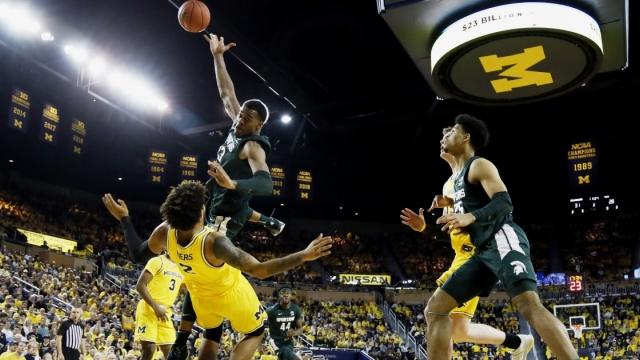 Conferences that have sent the most teams to the NCAA tournament

The Big East holds the record for the most teams from one conference making the NCAA DI men’s basketball tournament. The Big East sent 11 teams to the 2011 NCAA Tournament under its previous collection of schools.

Here are the conferences that have had the most men’s basketball teams qualify for a single NCAA tournament.

11 bids to the NCAA tournament

The Big East’s NCAA tournament participation a decade ago is the gold standard for postseason depth. Eleven of the conference’s 16 teams made the NCAA tournament, including three that went 9-9 in conference play in the regular season. One of those three teams, UConn, ultimately won the national championship, and all 11 teams won at least 21 games that season.

9 bids to the NCAA tournament

While the ACC had nine NCAA tournament teams in 2018, just three of them made the second weekend of the tournament and only one advanced past the Sweet 16. No. 1 seed Virginia was upset by No. 16 seed UMBC and No. 2 seed North Carolina lost to No. 7 seed Texas A&M and both losses were by at least 20 points — as two of the conference’s best teams that season didn’t even make it past the second round.

After nine ACC schools had their name called on Selection Sunday in 2017, just one of the nine teams advanced past the first weekend. But that one team, however, was North Carolina, which won the national championship. No. 2 seeds Duke and Louisville lost in the second round, as did No. 3 seed Florida State.

Four of the Big East’s nine NCAA tournament teams made the second weekend in 2012, including Louisville, which made the Final Four, and Syracuse, which advanced to the Elite Eight. Between the 2011 and 2012 NCAA Tournaments, the Big East was responsible for 20 tournament bids, which is an impressive figure.

MARCH MADNESS 2021: Complete schedule and dates for the 2021 tournament

Eight bids to the NCAA tournament

In the most recent NCAA tournament, eight Big Ten teams qualified and seven of them won at least won game. Only No. 5 seed Wisconsin fell in the first round. Three of the eight teams made the Sweet 16, including Purdue, which lost to No. 1 seed and eventual national champion Virginia in overtime in the Elite Eight, and Michigan State, which beat No. 1 overall seed Duke to advance to the Final Four.

For the first time in conference history, the SEC had eight teams in a single NCAA tournament in 2018. Six of them were seeded between a No. 5 seed and a No. 9 seed, which are often toss-up games, which is why only two of the eight teams advanced past the first weekend. Kentucky and Texas A&M bowed out in the Sweet 16, while the conference’s two highest-seeded teams — No. 3 Tennessee and No. 4 Auburn — both lost in the second round.

The eight Big East teams that qualified for the 2013 NCAA Tournament either lost in the first round or won at least three games in the tournament. Cincinnati, Georgetown, Notre Dame, Pittsburgh and Villanova lost in the first round, while Marquette, Syracuse and Louisville made the Elite Eight or further. Louisville’s participation in the tournament was later vacated.

The Big East put eight teams in the NCAA tournament in 2008 and they earned seven different seeds, including four teams that were top-four seeds. Louisville had the longest NCAA tournament run of the bunch, making the Elite Eight, while Villanova and West Virginia made the Sweet 16.