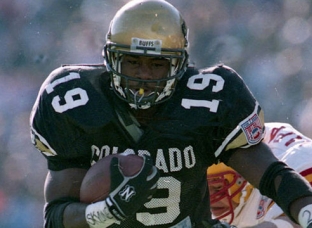 Colorado football: CU to retire the late Rashaan Salaam's No. 19

BOULDER, Colo. — The University of Colorado football program will retire uniform number 19 after this season to honor the late Rashaan Salaam, as the announcement took place Friday at the school’s annual football kickoff luncheon hosted by the Boulder Chamber of Commerce.

Salaam won the the Heisman Trophy, Doak Walker & Walter Camp Awards in 1994 and was a unanimous 1st-team All-American. pic.twitter.com/fgyiWmsktv

Salaam, the Heisman Trophy and Doak Walker Award winner for the 1994 season, was also a unanimous All-American and the Walter Camp National Player of the Year after having one of the best individual seasons in college football history. He tragically took his own life last Dec. 5 in Boulder at the age of 42.

After a short video showcasing some of his highlights, the longtime “Voice of the Buffaloes,” Larry Zimmer made the formal announcement. Zimmer called all 27 games Salaam appeared in as a Buff from 1992-94.  The official retirement ceremony will take place during CU’s homecoming game against California on Oct. 28.

A 6-foot-1, 215-pound tailback who played 8-man football at San Diego’s La Jolla Country Day, he would become just the fourth player at the time to gain 2,000 yards rushing in a season, when schools generally played an 11-game schedule and the NCAA did not count bowl statistics into season totals. He ran for 2,055 yards in averaging 6.9 yards per carry, doing so even though he did not play in five fourth quarters and on two other occasions, he played only briefly in the third quarter; over half of the yards (1,040) came against ranked opponents. He led the nation in rushing, scoring (24 touchdowns or 144 points) and all-purpose yards (2,349) and reeled off nine consecutive 100-yard games, including four 200-plus yard games. All the aforementioned set and remain school records.

Salaam actually wore No. 3 as a freshman in 1992, when senior linebacker Greg Biekert was in jersey No. 19. Currently, senior tailback Michael Adkins II adorns the number, thus will be the last to wear it before it is permanently placed out of service in honor of Salaam.


He won the first (and only) Heisman Trophy in Colorado history, claiming the 60th annual award as a junior, and declared early for the National Football League Draft. He was a first round pick by Chicago (21st overall) and would play three seasons for the Bears (1995-97), winning the NFC Rookie-of-the-Year honor in 1995 when he rushed for 1,074 yards and 10 TDs. Knee and ankle injuries would eventually shorten his pro career. He was inducted into CU’s Athletic Hall of Fame in 2012.