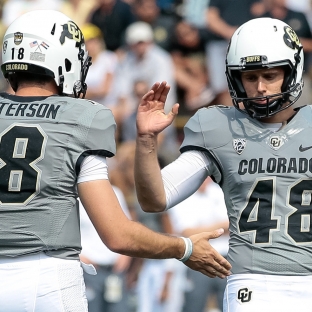 As for any sort of age joke, go ahead, because Colorado’s James Stefanou has heard them all — and usually it’s him cracking them.

“I figure if you make the jokes, they’re not going to make them for you,” he said.

The former soccer standout has quickly come of age as a kicker for the Buffaloes (3-0). Stefanou is 6-of-7 on field goal attempts this season and has hit all 10 extra points heading into Colorado’s Pac-12 opener Saturday against No. 7 Washington at Folsom Field.

A little background on the player from Melbourne: He got married in May, lives in a hotel close to campus, was a defender in soccer and loves everything about American football, except maybe all the contact. He went through a tackling drill the other day and got a little banged up.

Stefanou’s first attempt at kicking a football occurred when he was about 22 years old and hanging out with friends at a park Down Under. One of his mates held the football and the other stood about 40 yards away. Stefanou lofted the kick into the arms of his friend on his first attempt.

“He’s like, ‘You’re going to come down and have a kick with the guys,'” Stefanou said.

That’s how he ended up at Prokick Australia, an academy developed to assist in the transition to American football by providing the fundamentals of punting and kicking. Some of the pupils include the last four Ray Guy Award winners as the nation’s best collegiate punter: Tom Hornsey of Memphis in 2013, Utah’s Tom Hackett in ’14 and ’15 and Mitch Wishnowsky of Utah in ’16.

The Buffaloes were clued in about Stefanou through the program, saw some film and offered him a scholarship last spring.

“I haven’t had any 30-year-olds in college before,” coach Mike MacIntyre said. “We felt really good about his talent and the coaching he was getting. We liked who he is as a person. He’s doing really well.”

Still, this football thing has taken some adjustment. Namely, playing in front of so many fans. Being older, though — his birthday is April 15, 1987 — plays into his favor.

You don’t want to miss this live on Saturday. Make sure you get your tickets for the PAC 12 Championship rematch https://t.co/c4M8Ss0Hbv pic.twitter.com/aFbPAOMqEu

He insisted he doesn’t miss soccer. If he craves the game, he’ll simply watch Manchester United in the Premier League.

Stefanou played at a high level, representing his nation on its under-19 squad and suiting up professionally for several squads. He even went to Greece to play, but became homesick and returned to Australia.

That’s because he’s made himself right at home in Boulder. His wife, Laura, joined him on campus and is completing online coursework. He’s hoping to soon get her a puppy, for when he’s at road games or studying.

About that, it’s been challenging hitting the books again after such a long layoff from school.

“Writing papers and having deadlines,” he said, shaking his head. “I’m acclimatizing quite well.”

By the way, he’s not the oldest player on the FBS level this season. That distinction belongs to Western Michigan punter Derrick Mitchell, who is three months older than Stefanou after playing minor league baseball before returning to football.

As for how far his field goal range might extend, Stefanou’s not quite sure. He did connect on a 63-yarder while with Prokick Australia.

Being 30 does have some perks for Stefanou. For one, he rarely takes a backseat to any of his teammates on car rides.

Well, except when Buffaloes defensive back Ryan Moeller is around.

This article was written by Pat Graham from The Associated Press and was legally licensed through the NewsCred publisher network. Please direct all licensing questions to legal@newscred.com.