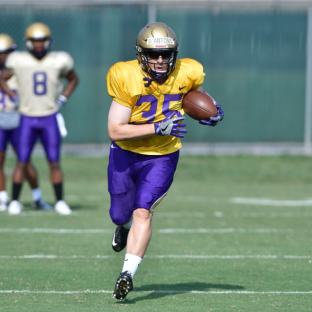 As a teenager at Abington High School in Massachusetts, Joe D’Antonio played on the school’s tennis team, but he was also a manager on the Green Wave’s football and basketball teams. Later in college, at Providence, he helped manage the men’s ice hockey team.

Part of his work in each stop as a manager was to help film games for coaches to break down later. When he graduated in 1986, though, video editing technology wasn’t as involved as it is 2017.

So as he sat in on a James Madison football practice in mid-August, D’Antonio, now the commissioner of the Colonial Athletic Association, was greeted with feelings both warmly familiar and entirely new.

“I’ve videoed my fair share of games over the years,” D’Antonio said, “but the technology these days is so complex. We didn’t have any of these tools back then. It’s crazy.”

D’Antonio is spending the 2017-18 season traveling around between CAA schools and spending one practice with each of the conference’s 22 champions from last season. The conference is calling it Joey D vs. CAA Champs, complete with a #JoeyDvsCAAChamps hashtag. D’Antonio’s already taken in the James Madison football practice, as well as a Northeastern women’s soccer practice.

“The coaches were great, the student athletes were great,” D’Antonio said. “Everybody was into it. It was exciting for me to be there with them. I certainly got out of it what I intended, and hopefully they did too.”

The idea, which D’Antonio said was his, was born from the fact that on a daily basis, his job as a commissioner simply didn’t have him connected with student athletes enough for his liking.

“It was a situation where I was looking for an opportunity to allow me additional interaction with the student athletes,” D’Antonio said. “I wanted a way to get into their world a little bit, and I thought of a scenario where practicing with them might be an opportunity to see things from their side.”

When you’re dealing with an entire organization of your own, not to mention SIDs and administrators from 10 full-time schools and 10 associate schools, time can get away from you.

“I think sometimes you get caught up in a lot of other stuff and you can lose sight of what we’re doing here,” D’Antonio said. “I think that’s the grassroots of what we do. There wouldn’t be commissioner jobs, athletic director jobs, head coach jobs if there weren’t student athletes.”

.@GoNUwsoccer gets the season started at 6pm tonight against Stony Brook but first take a look at their #JoeyDvsCAAChamps practice! pic.twitter.com/GkMq9PFcvS

Despite the few years it’s been since he played anything competitively, D’Antonio isn’t too concerned about his ability to keep up with the student athletes on his tour. After all, he’s spent the last handful of years running a dozen marathons, and he made it through his first two challenges unscathed.

Does his running history mean he’s going to have a thing or two to teach William & Mary’s cross country champion squads?

Don’t get carried away, he said.

“I can jog,” D’Antonio said, chuckling, “but I don’t think I’m quite as fast as they are.”