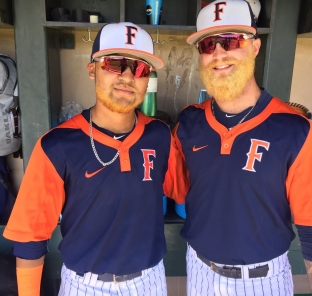 OMAHA, Neb. — It’s easy to spot the Cal State Fullerton baseball team roaming around Omaha this week, even without the national headlines or household names attached to them.

The Titans have turned to unconventional hair styles as a form of building camaraderie amidst their run to a second College World Series appearance in three years. CSU Fullerton will kick off the 2017 CWS against No. 1 Oregon State Saturday at 2 p.m. CT.

“It just brings us together,” freshman second baseman Sahid Valenzuela said of the Titans’ unique style. “Coach (Rick) Vanderhook is letting us go out there having fun and we’re just enjoying it all. We’re being ourselves.”

Valenzuela is to thank for the introduction of the locker room’s common bright blonde-bleached hair. That story begins the last week of May, right before CSU Fullerton began its regionals at Stanford.

Prior to the first game of the NBA Finals on May 25, Valenzuela made a friendly wager with fellow freshman Hank LoForte. Valenzuela bet that if the Cleveland Cavaliers took Game 1 in Oakland, LoForte had to bleach his hair that night. If the Warriors won, Valenzuela would dye his beard.

Valenzuela made good on his end of the deal, bleaching his goatee in the hotel room. But he also persuaded LoForte to dye his hair anyways, leading to others to join in the fun.

At first, some teammates were skeptical of the look. But after a 3-0 regional round and a thrilling super regional series win over Big West rival Long Beach State, more and more members continue to come around to the idea.

“That first weekend at Stanford, I was a little skeptical. I was like, ‘What are you guys doing.’ But it worked and it was like, ‘Alright, I guess I’ll buy in,’” said CSU Fullerton ace Connor Seabold, who added a hint of bleach to his long locks.

Valenzuela and LoForte first had to approach Vanderhook with the idea, and were reasonably timid about asking for permission. Vanderhook said he can be a “dictator” at times and described that one of his past teams went through a similar phase with unpleasant results.

“One guy looked like a leopard with spots and I just said never again,” said Vanderhook of last time.

RELATED: Everything you need to know about Cal State Fullerton

But the coach complied to the freshmen duo’s proposal, and the bleached hair returned.

“Sometimes you keep them on their toes,” he said. “Timmy (Richards) thought I’d never let him dye it.”

“I didn’t believe it,” said the senior Richards, overhearing nearby during the media day session.

Next up to join the cause was Taylor Bryant, whose lumberjack-esque beard has drawn plenty of air time during this year’s tournament. The redshirt junior said he’s been growing it out since Jan. 1, but he added the blonde tint after the regionals round. According to him, beard maintenance is a twice-a-day routine.

“It’s just simple stuff,” Bryant said. “I condition it and shampoo it in the shower and then when I get out, I brush it and put beard oil in it. And then I repeat at night.”

The beard is HERE! #CWS pic.twitter.com/jEh3eNS7tD

The consensus pick for best facial hair on the team, however, seems to go to sophomore Brett Conine, who —fittingly, as a closer — boasts a handlebar mustache that Rollie Fingers would be proud of.

“It started in early March, I never really grew out a mustache before but a couple of the guys were in support of doing it along with me,” Conine said. “It kind of developed into what it is today. I never expected it to turn out as it did, but I’m rocking it now.”

There may be many unique looks within the CSU Fullerton locker room, but they all stem from a common basis: a search for team unity, a distraction from the stress and seriousness of tournament time and a way to set it apart from every other team in Omaha.

“It gives us an identity,” said Seabold, who will start Game 1 against the Beavers. “We’re a pretty laidback group and we like to have fun. This is a reflection of that. Just coming together and dying our hair like that, I thought it was hilarious.”

“It’s something we all enjoy, looking like this and dying our hair and beards,” Bryant added. “The first time everyone did it, it was a good experience and we all got to embrace it together. It lets us be ourselves, it lets us show the personality of our team.”

Not all Titans have participated in this season of hair style changes, but Gavin will add another tally to the list come Friday night. Although the 6-foot-6 southpaw is superstitious when it comes to facial hair, he’ll give a new hair color a go.

“It’s just a routine for me to shave before every start. So that’s why I don’t have the facial hair. It’s been a superstition for me for the last two or three years,” Gavin said. “But a lot of guys have dyed their hair and I will tonight.”

And so the movement continues.