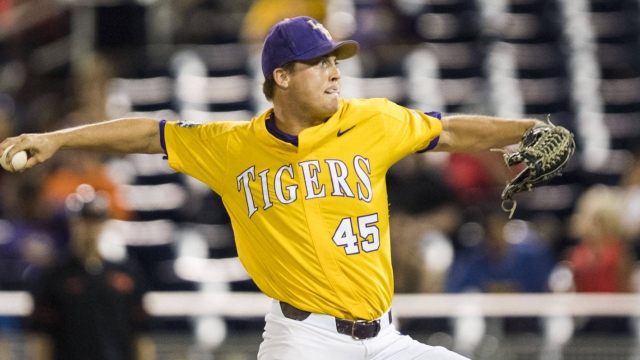 OMAHA, Neb. — Some things to know as Florida (50-19) and LSU (52-18) play for the national championship in the best-of-three College World Series finals starting Monday night:

WHO IS THIS GUY?

LSU is short on starting pitching because of a forearm injury to Eric Walker, so coach Paul Mainieri is throwing right-hander Russell Reynolds in Game 1. Reynolds has made 14 appearances this season, but this will be his first start in 2017.

LSU’s senior right-hander Russell Reynolds (45) will start Monday’s game on the mound for the Tigers.

“We’re going to count on Russell’s experience as a fifth-year senior,” Mainieri said. “He’s pitched very well the last few times out, and we feel like he gives us the best chance to get us off to a good start.”

LSU would be alone in second place in all-time titles if it wins a seventh this week. Skip Bertman coached the Tigers to championships in 1991, 1993, 1996, 1997 and 2000, and Mainieri coached the 2009 title team. The Tigers are tied with Texas for second with six championships. Southern California is the leader with 12.

Florida is in the finals for the third time. The Gators were swept in their previous appearances, by South Carolina in 2011 and by Texas in 2005.

MAKE IT A DOZEN

The Southeastern Conference is assured of winning its 12th national championship in baseball. That will rank second among conferences, well behind the Pac-12’s 28. The Big 12 is third with nine titles.

Florida coach Kevin O’Sullivan said he didn’t know whether ace Alex Faedo could come back to pitch in relief if the finals goes to a Game 3. He’s pitched 14 1/3 innings of shutout ball in Omaha, all in starts against TCU, and became the fifth pitcher in the last 30 years to have double-digit strikeout games in the same CWS. The Detroit Tigers’ first-round draft pick has allowed one run in 27 1/3 innings in the NCAA Tournament with 44 strikeouts.

If LSU ace Alex Lange were to pitch again, it wouldn’t be until Game 3. Lange has worked 13 1/3 innings and struck out 16 in two CWS starts. He allowed two hits and struck out eight in 7 1/3 innings against Oregon State on Friday. “He’s a first-round draft choice, a long career ahead of him. He’s never pitched on three days’ rest before so I don’t know how effective he would be,” Mainieri said. “I want to do everything in my power to make sure that he leaves our program healthy for the Chicago Cubs.”

LSU will make its 7th trip to the championship round in the #CWS. They won the title the previous 6 times. pic.twitter.com/AOvZr6Z461

Each starting pitcher in Florida’s four CWS games has recorded at least nine strikeouts, with Faedo doing it twice. In the Gators’ 31 previous CWS games, only one of their pitchers struck out nine.

Florida’s Ryan Larson is struggling mightily. He’s 0 for 14 in the CWS and 2 for 28 with 13 strikeouts since the start of super regionals. He was the Gators’ leadoff batter until Saturday, when he was moved to No. 9. JJ Schwarz also has had a hard time in Omaha, going 2 for 16.

ALL OR NOTHING, ALMOST

Michael Papierski got a hero’s welcome in the LSU dugout after two home runs against Oregon State.

LSU’s Michael Papierski is 4 for 14 in the CWS, but three of those four hits have been home runs. Papierski on Saturday became the first player in CWS history to hit homers from both sides of the plate in the same game and the first LSU player to go deep twice in a CWS game since Brad Cresse did it against Southern California in 1998.

RELATED: LSU’s Michael Papierski homers from both sides of plate

LSU’s Zack Hess has earned three saves — second-most all-time in a single CWS — in four appearances. Florida’s Michael Byrne is 2 for 2 on save opportunities at the CWS, having worked 3 2/3 innings, allowing four hits and striking out seven.