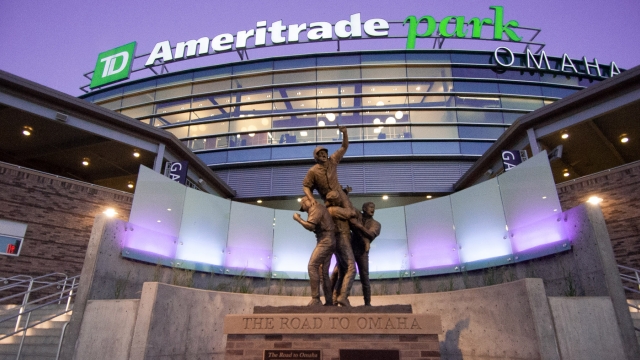 OMAHA, Neb. — So this is where it used to happen…

The tour of college baseball’s Mecca begins atop a hill, in the parking lot of the renowned Henry Doorly Zoo. Rosenblatt Stadium once stood here and hosted the College World Series for six decades. No roars or bright lights here anymore on a June evening, just ghosts.

There’s nothing to see here now but a small-scale replica of the diamond, preserved in the middle of the parking lot as homage to the past. Infield at the Zoo, they call it. The Rosenblatt sign, a few dozen of the old blue, red and yellow seats, and home plate carefully placed precisely in its same location, when the stadium was real and alive.

They keep the College World Series close to the heart here. That’s the message, on a quiet evening, atop an empty hill.

So this is where it happens now…

The intersection of Cuming and 13th Streets is 3.7 miles north of the remnants of Rosenblatt, on the other edge of downtown Omaha. Here is the main entrance to TD Ameritrade Park Omaha, a stadium opened in 2011 for $128 million, just in time to shoo away any suitors who wanted to pick Omaha’s pocket and lure away the College World Series.

The Final Four might wander from city to city, always a big party for its host, but also always on one-year loan. The College World Series is in the bag for Omaha through 2035. It is as Nebraska as silos.

TD Ameritrade is a glassy, modernistic-looking place, with VIP suites and a big flashy scoreboard. But there is something that links it to that hill down the road. A conduit between the old and the new.

It is a statue.

Mid-June has come again, and there is the usual steady stream of people dropping by The Road to Omaha, posing for pictures. The statue is bronze, 1,500 pounds and conveys the joy of celebration, with a player in a batting helmet leaping into the arms of three teammates at home plate. A walk-off homer delivered.

The Road to Omaha has become, without question, an iconic symbol and the beating heart for the enduring romance between a city and the College World Series. What must that mean to the man who created it?

“It’s been almost 20 years since I did that sculpture. Every now and then I’m able to go by the sculpture and not really spy on the fans, but observe them,” John Lajba said Friday from his studio across town. “What better compliment could I have than someone to really use my sculpture so much that it is part of their life, and part of their experience here in Omaha at the World Series? It amazes me. I’m so proud of that something created in my studio is being used like that. It just warms my heart.”

When the whole world is in your hands. #gobeavs #cws pic.twitter.com/JEK4m6ffYJ

Lajba’s varied resume of past works range from Bob Hope to Dale Earnhardt. But back in 1998-99, when he was working on The Road to Omaha to mark the CWS’ 50th anniversary here, its long-lasting impact could not have been imagined.

“You never know what happens with work that you do. You never know the life that it takes on,” he said. “I tried to put as much spirit as I could into the piece. I really wanted it to feel and look as life-like as I could make it. I wanted to make it on a scale that was just slightly more than life size so fans could say, ‘Hey, that looks like one of the players.”’

For models, he used volunteer students from a University of Nebraska Omaha dance class. He laid out an indoor baseball diamond and asked them act as if they had just won a game.

“They would celebrate and jump on each other. I just had them play that scenario and celebrate. They really got into it and that really helped me formulate the physicality of the sculpture. I really wanted to create an idea of celebration and team spirit, and how the whole team spirit is almost compounded by the enthusiasm of the fans.”

It took him 18 months. When he was done in his studio, there was one problem.

“I welded it together in the back of my building. It was too big, and I couldn’t get it out the garage door. I had to have part of my brick wall taken apart.”

It stood by Rosenblatt the final 12 years, then moved north to the main gate at TD Ameritrade. A connection between the old park named after a mayor who had baseball in his blood, and the spiffy new park named after a brokerage firm.

“You know what it also connects between the old and the new?” Labja said. “The fans. That sculpture was always about the players and the fans.”

“I went down there just the other day just to make sure it was clean. I always try to take care of that sculpture if I can,” he said. “I used to think, ‘Boy it took me so much time.’ But now I’m kind of more removed from that aspect of the effort and the work involved, and I just admire its life.”

Times have changed, but then again they haven’t. The teams in the NCAA tournament still talk about getting to Omaha. Nowhere else but Omaha. The crowds still roll in 20,000-strong, many of them making sure to get their pictures taken by John Lajba’s sculpture. The Greatest Show on Dirt is back in town.