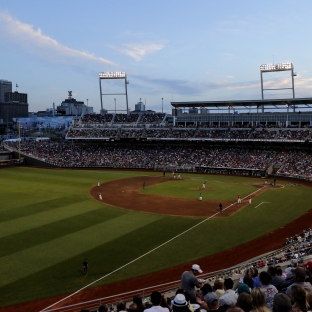 The 2017 College World Series begins Saturday with two matchups, as Oregon State takes on Cal State Fullerton at 3 p.m. ET, then Florida State and LSU face off at 8 p.m. ET.

On Sunday’s Day 2, Texas A&M and Louisville play in the first game at 2 p.m. ET, and TCU and Florida finish off the opening matchups at 7 p.m. ET.

To get you primed for Omaha, here is a breakdown of the first four games:

Preview: The number one pitching staff in the nation (Oregon State) against the lowest-scoring team in Omaha (Fullerton). Not an ideal matchup for the Titans, but they do have the number one facial hair style in the nation.

Preview: One of the hottest teams in Omaha (LSU is riding a 16-game winning streak where it has scored nine or more runs 10 times in its past 14 games), faces the highest-scoring team in the field of eight. This one could get explosive.

Preview: The nation’s top player (Louisville’s Brendan McKay) on a team with the second-best ERA and record in the field of eight against a squad that really knows how to close a game (Texas A&M won in 15-innings against Davidson in its Super Regional Game 1, then scored 10 runs in the eighth and ninth of Game 2 to come back and beat the Wildcats 12-6).

Preview: Two teams looking to avenge early exits from Omaha last season face off in the highest team ERA in the CWS (TCU) vs. the only team that made it to Omaha with two NCAA Tournament losses (Florida). The Gators are in good company, though. Last year’s champ, Coastal Carolina, dropped three games in the tournament before winning the crown.