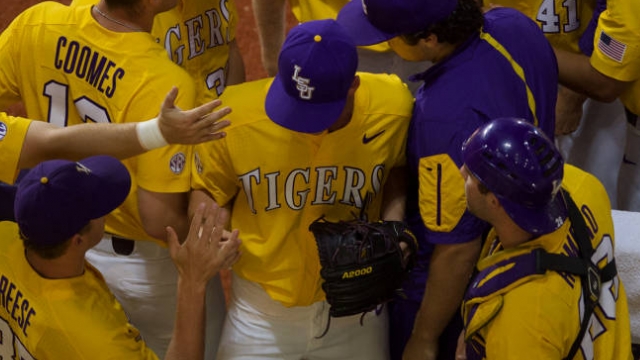 OMAHA, Neb. — Here’s this kid, this somewhat willowy freshman armed with little but his guile, and his job in this precise moment is to defeat a grown man digging in 60 feet away.

What’s the kid to do? Eric Walker goes right after him.

“Sometimes, with those big strong guys, as scary a proposition as it is, you have to pitch inside to them,” said LSU coach Paul Mainieri. “Well, you’ve got to have a pitcher that’s got a lot of confidence in himself with an 87 mph fastball to be able to do that to a guy that can easily hit a 400-foot home run on you.”

LSU’s Eric Walker will look to give the Tigers a chance at a 2-0 start to open the 2017 CWS in Omaha.

How do you go after the biggest guy in the room with such confidence? By accepting that failure is a possibility.

“If you’re afraid to fail, then you probably will fail,” Walker said. “Instead, you cannot be afraid to fail and accept what happens. You can kind of control your own fate. That’s just kind of my mindset and the way I think. I think it works in all sports. It works in life. That’s kind of how I approach things.”

That is why LSU has no reservations about sending the 19-year-old Walker to the mound in Monday’s College World Series clash against top-seeded Oregon State. It doesn’t matter if the stage is monumental or that the Beavers have lost four games.

LSU’s coaching staff is confident that their belief in Walker — the freshman starter — will pay dividends.

“I’m ultra confident in his ability to go out there (Monday) night and get the job done for us,” Mainieri said.

Walker is starting to develop a reputation as a big-game pitcher at LSU.

Against Arkansas in the SEC tournament championship game, Walker limited a potent Razorbacks lineup to one run on five hits in 7.2 innings. A week later, he shut out Rice over eight sterling innings, never once going to a three-ball count.

He’s had this knack for delivering when the moment is the biggest for some time now, though.

In Walker’s freshman year at Arlington Martin High School, head coach Curt Culbertson got his first glimpse of Walker’s unflappable demeanor. Culbertson turned to him to protect a one-run lead in the final inning of a playoff game against a tough team. Walker faced four batters, retired three of them and preserved the win.

Two years later, Culbertson turned to Walker in the state semifinals against John B. Alexander High School of Laredo, Texas.

“Probably the best high school baseball team I’ve seen in a long time, and we beat them 3-2,” Culbertson said. “It was the most unbelievably pitched game that I’ve ever seen, even to this point. [Walker] looked like he was 20 years old against those 16- and 17-year-olds. It was no contest.”

RELATED: Longest active win streaks in the nation on the line when Oregon State meets LSU

This is what stood out to LSU pitching coach Alan Dunn. In an age where the velocity reading on a radar gun reigns supreme, Dunn became enamored with the way Walker always seemed to be in complete command of the game, even if his fastball regularly checks in at 87-89 mph.

He was sold when he saw Walker pitch at a Perfect Game showcase in Atlanta the summer before Walker’s senior year. Walker hadn’t pitched in a few weeks while he was dealing with some inflammation in his arm.

“He came back having not pitched or done a bullpen, anything,” Dunn said. “He pitched a game and it was like, ‘Wow, this is something special.’ “

Mainieri said Dunn came back “raving” about Walker, saying he figured he would earn a spot in the weekend rotation as a freshman. Walker did just that, giving LSU its strongest third starter in Mainieri’s tenure.

“He has exemplified that kind of poise and composure from the day he walked onto our campus,” Mainieri said. “… He’s had an outstanding year for us. You have to grin a little bit’

If Walker is accepting of failure, he probably knew it was going to find him at some point. There was one stretch this season where he had trouble escaping its grasp.

He was knocked around in three straight weeks in April and May, giving up 15 earned runs in starts against Kentucky, Alabama and South Carolina. His ERA jumped from 2.48 to 4.09. Whispers from the outside were starting to filter through saying he’d hit a wall.

“We go through these periods — all pitchers do, whether it’s big leagues or college — there’s periods where you’ll go through a little valley and then you’ll start on the uprise,” Dunn said. “I’ve never seen a pitcher that didn’t do that.”

Walker wasn’t locating as well, making his fastball more hittable. His breaking pitch didn’t have the same depth. But he kept working through it.

LSU’s Eric Walker has shown some poise and maturity this year as he struggled through some stretches.

“The demeanor never changed, he kept attacking the strike zone, kept doing all those things,” Dunn said. “When he got back into having his command and the stuff gained that extra tick, you’ve seen where the guy has been since then.

“That’s just pitching, man. There’s no way you’re going to go through a season where you don’t have peaks and valleys. It doesn’t happen. It’s how you handle those times that makes you a dude or not a dude.”

Entering the Oregon State game, Walker has pitched into the eighth inning in three of his past four starts. His last two starts — the SEC tournament championship and the regional championship — ended with him walking off the field to a standing ovation.

Walker might’ve broken his poise for the briefest of moments then, allowing himself a smile and a tip of his hat to the crowd.

“I remember getting chills,” Walker said. “… You don’t really prepare for that. When you walk off, it’s kind of an in the moment thing, you have to grin a little bit.”

He remembered thinking about the size of the crowd there to see him pitch — more than 10,000 on each occasion.

That’s child’s play in Omaha, his teammates said. Be ready for crowds twice that size.

It’s enough to make a kid nervous. Or, maybe it’s not. That depends on the kid.

“I think I’ll sleep well tonight,” Walker said on the eve of the biggest game of his life.

This article is written by Luke Johnson from The Advocate, Baton Rouge, La. and was legally licensed via the Tribune Content Agency through the NewsCred publisher network. Please direct all licensing questions to legal@newscred.com.