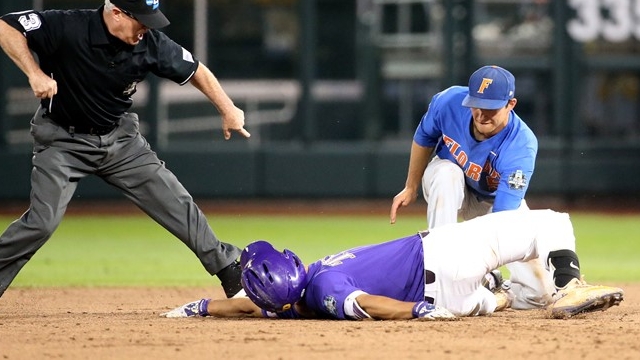 OMAHA, Neb. – Nick Horvath said he doesn’t have a special routine as Florida’s late-inning defensive replacement in center field. If Horvath, also a left-handed reliever, doesn’t pitch in the game, he usually just grabs his glove, runs to the outfield and waits for the ball to come his way.

The ball certainly found him in Florida’s 4-3 victory over LSU on Monday night in Game 1 of the best-of-three College World Series championship final. Horvath made the biggest play of the game, and if the Gators go on to win the program’s first national championship, one of the biggest plays in school history in the bottom of the eighth inning.

“I threw in the pen,” Horvath said as he sat on the floor in the Gators’ clubhouse, glancing at messages on his iPhone. “My arm was loose already.”

Not long after taking some warm-up tosses in the bullpen next to closer Michael Byrne, Horvath entered the game at the same time as Byrne, who took over for Gators starter Brady Singer after LSU’s Greg Deichmann opened the bottom of the eighth with a double and Florida leading, 4-2.

Byrne retired his first batter, Zach Watson, on a fly ball to right fielder Ryan Larson, who started in center and moved to right when Horvath came in. Horvath’s moment under the lights at TD Ameritrade Park came next.

LSU third baseman Josh Smith hit Byrne’s 2-2 pitch into the gap in right-center field, scoring Deichmann to trim Florida’s lead to a run. However, Smith envisioned more than a single and headed for second.

Meanwhile, Horvath raced to the ball, backhanded it with his glove, and quickly threw a strike to shortstop Dalton Guthrie. Second-base umpire Danny Collins, in good position to make the call, flashed the “out” sign.

“That probably saved the game,” Guthrie said. “If not, the runner is in scoring position with only one out and a dangerous lineup. That was a great play by Nick and something I hope doesn’t go unnoticed. That was huge, absolutely huge.”

No worries Guthrie, Horvath earned his due.

Full #OmahaGators highlights from the 4-3 #CWS Finals win over LSU:

Byrne retired designated hitter Beau Jordan to end the inning and then closed out the Tigers in order in the ninth for his NCAA-leading 19th save. The victory was Florida’s first in three trips to the CWS championship series and put the Gators 27 outs from claiming their first national title.

Horvath’s throw allowed the Florida fans in the LSU-flavored crowd of 25,679 to relax for a moment in what was shaping up as a potentially big inning for the Tigers.

“I’ve seen LSU enough to know that when things get going, they get going in a hurry,” UF head coach Kevin O’Sullivan said. “That changed the whole complexion of the ballgame.”

It also served as vindication for Horvath, who is considered the Gators’ best defensive outfielder. Horvath misjudged a ball in Friday’s loss to Texas Christian by initially breaking in and then having to backpedal. The ball bounced off his glove for a two-run triple and a deficit the Gators were unable to overcome.

He had no trouble picking up the ball off Smith’s line drive into the gap.

“I knew Larson was going behind me, so I took the aggressive route,” he said. “And I fielded it pretty fast. Honestly, that’s probably what got him out more than the throw, how fast I got it out of my glove.”

The ball clearly beat Smith to the bag. Replays showed Smith may have gotten his hand on the bag before the tag, a very similar bang-bang play at second to the one in the first inning when Guthrie was called out trying to advance to second on a pitch in the dirt.

Sometimes you get the breaks, sometimes you don’t. But there’s no play at all if not for Horvath’s perfect throw.

“I had my hand up in the air before he let it go I feel like,” Byrne said. “I was like, ‘wow, he’s got him.’ You expect Nick to do that. He’s thrown out a bunch of guys. He’s a pretty good outfielder I’d say.”

Horvath’s throw highlighted a textbook win for the Gators – at least according to their recipe for success. Guthrie made an outstanding diving catch in foul territory in the third inning on Kramer Robertson’s pop up, and catcher Mike Rivera stopped a ball in the dirt and threw out Robertson trying to steal second in the seventh.

A man on a mission. #SCtop10 pic.twitter.com/zzsOThmsWh

The defensive plays helped starter Brady Singer do his thing on the mound. Continuing a trend of outstanding starts by Florida pitchers in the CWS, Singer allowed only three runs over seven innings and struck out a career-high 12, which set a CWS single-game record in the championship series. Singer improved to 2-0 with a 2.57 ERA in the CWS with 21 strikeouts in 14 innings.

“Great game,” LSU coach Paul Mainieri said. “We went up against who I believe to be maybe the best pitcher I’ve seen in the SEC for an opponent since I’ve been the coach at LSU. He reminds me so much of Aaron Nola it’s scary. I think the guy will be the first pick in the draft next year.”

The Gators scored three runs in the fourth inning, two coming on Jonathan India’s ground-rule double to center, and added a run in the seventh on Rivera’s RBI single to extend the lead back to two runs after the Tigers scored a pair of runs in the sixth.

“It kind of worked out the way we hoped it would,” O’Sullivan said. “Brady would go deep in the ballgame and we would not have to extend Michael Byrne [so]that he would be available [Tuesday]. We just do enough to stay ahead.”

The Gators will turn to freshman Tyler Dyson to start Game 2 on Tuesday. In the clubhouse afterward, the victorious Gators refused to focused on the fact they are one win away.

“I just hope we don’t make it another elimination game, try and get it done [Tuesday],” Guthrie said. “They’re surely not just going to give it to us. They are too good of a team.”

O’Sullivan’s message is clear: “We’re here to win this thing,” he said. “We’re going to have to play better if we want to win this thing. It’s not nearly over. We got six hits. Brady had to pitch his tail off.”

As usual, Monday’s victory wasn’t perfect or easy. Still, the Gators are one win away from making their Omaha dreams finally come true.