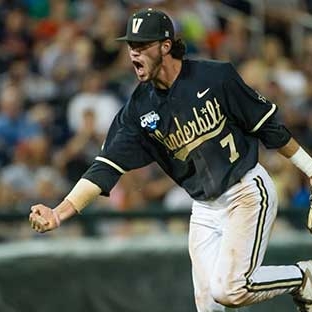 College World Series: MLB No. 1 overall draft picks to play in the CWS

After the Minnesota Twins took Royce Lewis with the No. 1 overall pick in this year’s Major League Baseball Draft, we haven’t seen a college player taken in the top spot since Vanderbilt star Dansby Swanson went No. 1 to Arizona in 2015.

That year, Swanson became the most recent No. 1 overall pick in the MLB Draft to play in the College World Series the year they were drafted.

It’s not a common occurrence. The No. 1 overall draft pick has only appeared in that year’s College World Series on 10 occasions since the draft started in 1965.

That inaugural draft’s No. 1 pick — RIck Monday — was the first to play in the College World Series leading Arizona State to the 1965 national championship.

The No. 1 pick, in general, doesn’t always turn into a Hall of Famer or even an All-Star, and the list below mirrors that fact. Some have enjoyed long careers, but very few All-Star appearances or MVP-type seasons.

With the help of the NCAA Stats team of Jeff Williams and Michelle Forkner, here are the 10 top draft picks and how they fared in the CWS and their MLB careers.

1997 – Matt Anderson, Rice — Anderson had two relief appearances, 4.2 IP, 3 ER, 8 K in 1997 CWS. Drafted by the Detroit Tigers, Anderson pitched for seven years as a major league reliever. He spent almost all of his seven-year career with the Tigers, save a short comeback stint with Colorado in 2005 before retiring. Anderson’s top year came at age 24, when he saved 22 games for the Tigers and had a 2.62 ERA. He struck out 52 and walked 18 in that year.

1994 – Paul Wilson, Florida State — Wilson had one appearance in CWS, a complete game win, allowing two earned runs and struck out seven. He also pitched in the 1992 CWS with two relief appearances allowing two runs in 4.2 IP. Wilson was drafted by the New York Mets and broke in with them in 1996 with a 5-12 record and 5.38 ERA. In a seven-year career, Wilson went 40-58 with the Mets, Devil Rays and Reds.

1978 – Bob Horner, Arizona State — Horner went went 5-for-19, with one home run, 11 RBI and made the All-Tournament team (Arizona State was national runner-up). Horner also played in 1976 and 1977 CWS. He was the 1977 Most Outstanding Player and led Arizona State to the National Championship in 1977. Horner played immediately with the Atlanta Braves and had 23 homers in 89 games to earn the Rookie of the Year award. He played nine of his 10 years with the Braves and was an All-Star in 1982. He was a consistent home run hitter with 218 career dingers with a .277 average.

1965 – Rick Monday, Arizona State — In CWS, Monday went 6-for-24 with two HR and four RBI and made the All-Tournament team for Arizona State, which won the national championship. Monday is the answer of a trivia question — he’s the first Major League draft pick. He was selected by the Kansas City Athletics and enjoyed a 19-year career with three teams, — and when the A’s moved to Oakland in his third year, four cities. He was an All-Star twice, a career .264 hitter and had 241 career home runs. He also stole 98 bases.