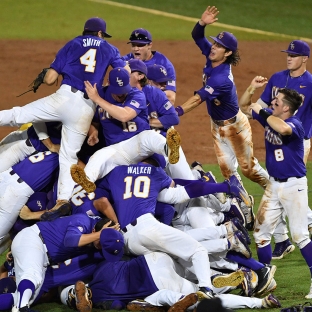 BATON ROUGE — For the 18th time in program history, the LSU baseball team is heading back to Omaha.

The Tigers will take a 16-game winning streak into the 2017 College World Series.

It was over when…

LSU scored six runs in the top of the fifth inning to overcome a 4-3 deficit. The Tigers collected three hits and three walks in the frame and never looked back. The key hit was a two-run double by Kramer Robertson, who finished 3-for-5 with three runs and two RBIs.

Take a lap, guys! We are going back to Omaha. Ready for Seven. pic.twitter.com/gXtOwPxNLF

See Yal in Omaha!!!! This team is special. S/o @CalebGilbert2 for picking me up tonight.#stud

Three rain delays, seven Bulldogs pitching changes and more than five hours later, LSU realized it goal of a trip to Nebraska for the second time in three seasons.

No. 4 national seed LSU will face Florida State (44-21) in its CWS opener on either Saturday or Sunday in Omaha’s TD Ameritrade Park. Game dates and times are expected to be announced Monday.

The winner of the Tigers and Seminoles will face either No. 1 Oregon State or Cal State Fullerton.