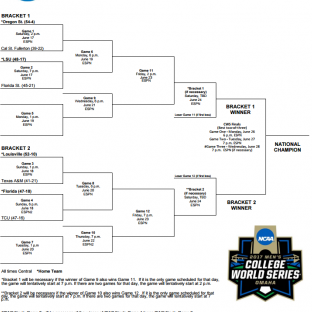 The Florida Gators are halfway there.

Kevin O’Sullivan’s team built a 3-0 lead over LSU in the fourth inning and held on from there, doing what it’s done so many times this year: win a one-run game. Michael Byrne pitched two outstanding innings to get the save after Brady Singer entered the College World Series record books with 12 strikeouts.

All that added up to a 4-3 victory, putting Florida nine innings away from the 2017 championship.

That potentially clinching Game 2 is set for 8 p.m. ET on Tuesday, while the Tigers will look to even the series and force a Wednesday contest for all the marbles.

Read on below for a full recap of Monday’s Game 1 and look ahead to the rest of the championship finals.