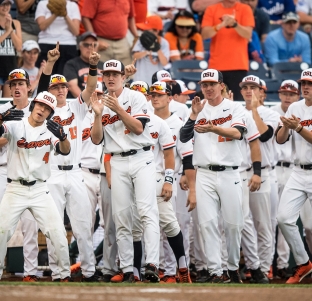 OMAHA, Nebraska — One of the two longest active winning streaks in Division I baseball will end Monday night. That much is known.

“Something’s gotta give. So we’ll see,” LSU coach Paul Mainieri told reporters after his Tigers’ 5-4 victory over Florida State on Saturday night. “I would like to see you all show up for that game if you’re not doing anything on Monday night. It might be a lot of fun.”

LSU and Oregon State will square off in Game 2 of the CWS at 6 p.m. CT Monday. The Tigers will be the home team at Alex Box North! #GeauxCWS pic.twitter.com/8xESHaFzlU

The winner will take control of Bracket 1 and need one more victory to reach the best-of-three finals starting next week. Eric Walker (8-1) will start for LSU against Bryce Fehmel (5-2).

The Beavers own the nation’s longest win streak this season with the 23-gamer they had from late February to mid-April. Their current streak began April 30, with win No. 22 being a 6-5 victory over Cal State Fullerton on Saturday.

“Honestly, I’m glad Oregon State won that game,” said Mainier, whose team is unbeaten since May 11. “And I’m glad we won our game even more so. It sets up a great match, I think, on Monday night.”

The teams have met twice. LSU beat the Beavers both times in the 2012 Baton Rouge regional, with Austin Nola scoring on a wild pitch in the top of the 10th inning for a 6-5 victory in the second game.

LSU’s 17-game streak ranks as the fifth-longest this season. Missouri had a 20-gamer and Louisville and USF had 19-gamers.