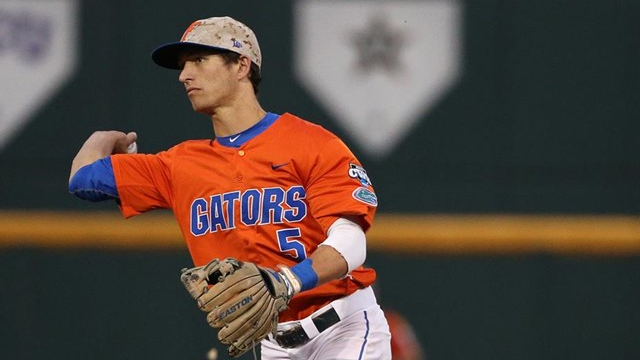 In its 11th trip to the College World Series, Florida once again will try to break through and win its first baseball national title in school history.

Gator fortunes could hinge on a slick-fielding college shortstop who grew up around Major League clubhouses and learned to appreciate the glove work of some of the best at his position.

Pitching and defense reign in Omaha, and Florida junior shortstop Dalton Guthrie has probably saved as may runs as he’s driven in during his college career (67 career RBIs, if you’re keeping track). Guthrie’s acrobatics have been on full display this season — from his over-the-shoulder grab that salvaged the final game of the Tennessee series, to his handful of highlight-reel plays at Georgia, to the rocket throw across the diamond he made from his knees last weekend in the Super Regionals against Wake Forest.

“I’ve always just taken pride in my defense,” Guthrie said. “If you’re struggling with the bat, you’ve got to find a way to help your team somehow. Everyone focuses a lot on the bat and your home runs and your stats. I think [defense is]kind of an underappreciated part of the game that a lot of people don’t take into consideration.”

That appreciation began at an early age. Guthrie’s father, Mark, was a journeyman Major League Baseball pitcher who spent 15 seasons with seven different Major League franchises. Often, Mark would take Dalton and his older brother, Kevin, out for batting practice on the big-league fields after the stadiums cleared. There were clubhouse visits. Dalton got to meet Sammy Sosa, Moises Alou and Kerry Wood in the clubhouse when his dad pitched for the Cubs.

“I just didn’t understand at the time what I was doing,” Guthrie said. “I mean, those were some of the greatest guys to ever play the game and I was like, yeah, it’s just Sammy, it’s just Kerry.”

RELATED: College World Series — Everything you need to know about Florida

In 2002, Mark Guthrie moved on to pitch for the New York Mets. Dalton, just 8 at the time, began emulating the moves of Mets’ shortstop Rey Ordonez. By then, Ordonez was a three-time Gold Glover.

“He was always my hero growing up,” Guthrie said. “I still remember that relay throw from his knees. I was always a big fan.”

Said Mark: “When you make that play in the hole, you do a pop up slide, backhand the ball, that’s kind of the way he’s done it since he was 8, since he saw Rey. It’s kind of an odd guy for kids today to think of, but that’s what he knew and that’s what he liked and kind of where a lot of his style plays come from.”

Along with making the flashy plays, Guthrie made the routine ones as well. His .963 fielding percentage and 29 double plays turned is a testament to his consistency.

Guthrie has missed parts of this season with leg injuries, including a sprained ankle that sidelined him for the SEC Tournament. But he’s finding his groove again both in the field and at the plate. Guthrie went 3 for 4 in UF’s 3-0 Super Regional clinching win over Wake Forest on Monday night.

Guthrie is making his third straight trip to Omaha, and perhaps his most unexpected. The Gators started the year 20-11 and at one point were 5-6 in SEC play before making a late-season run to share an SEC regular season title with LSU. Nothing has come easy. Florida has won 18 games by one run this season.

That makes Florida an underdog heading into CWS tonight against TCU. Guthrie said he doesn’t mind that role.

“Especially for being the big-name team the first two years,” Guthrie said. “Now we’re kind of the team that finds a way to win and squeaked in almost. We’ve got something to prove and if there’s a team to do it, it’s this one. We’ve got the right makeup and the right players. It’s always the weird team that wins it.”

After the College World Series ends, Guthrie will likely follow the footsteps of his dad into professional baseball. The Philadelphia Phillies selected him in the sixth round of the MLB draft earlier this week. Guthrie was able to share the experience with both of his parents and some teammates in his dorm room.

This article is written by Kevin Brockway from Gainesville Sun and was legally licensed via the Tribune Content Agency through the NewsCred publisher network. Please direct all licensing questions to legal@newscred.com.