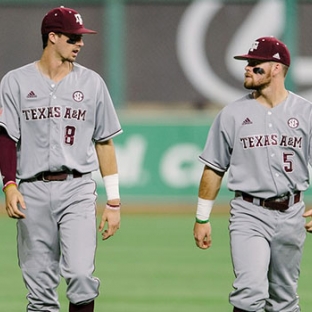 OMAHA, Neb. — By Logan Foster’s count, he was 3 years old when he saw his first College World Series game. He was a toddler from Lincoln, 50 miles down the road, and what he remembers from his childhood are all the Junes he looked forward to, when he could jump in the family car and head for Omaha again.

“This is the best time of the year,” he was saying Friday. “Better than Christmas.”

Sometimes, he’d sit behind home plate, always in his red Nebraska cap. Other times, in general admission. Every single year, he’d make it for a game or two. He’d look down at the big guys on the field, and think…someday…someday. “That was one of my dreams growing up as a kid,” he said, “that I was going to play here.”

Someday comes Sunday. Foster’s cap will not be Nebraska red but Texas A&M maroon now that he is a freshman outfielder and catcher who helped the Aggies get here with his .283 average and his home run in the super regional.

The Aggies welcome you to Omaha! #CWS pic.twitter.com/UDcnjhlZdt

It all hit him Friday, when the Aggies took the field at TD Ameritrade Park for practice. He was not in the stands anymore, dreaming. He was in the batter’s box, hitting.

“The first three balls I swung at, I had no idea where they were going. I thought, ‘OK just take a deep breath and relax,’” he said. “Out in right field, I just kind of took a second and looked around and took it all in. It’s just an unreal feeling. I can’t even put it into words.”

So how’d he end up at Texas A&M? Aggies coach Rob Childress was once a Nebraska assistant, with a daughter named Hannah. And little Hannah had a buddy at daycare and preschool: Logan Foster.

“Me and Hannah grew up together,” he said. “Ever since I can remember, we were best friends, until they moved away.”

Childress left to be the head coach at Texas A&M for the 2006 season but kept an eye on his daughter’s daycare pal, who had attended a few of his camps and was putting up big numbers in high school back in Lincoln. Eventually, Foster made his college choice and decided to go with the man who knew him when he was 1 year old.

“Once he made a decision to be an Aggie,” Childress said, “I said, ‘I’m not putting the pacifier in your mouth anymore. That’s done and over with.’”

THE AGGIES ARE GOING TO OMAHA!! #12thMan #CWS pic.twitter.com/CZrAxcOY7S

It was a rather unusual path, and now the road has brought Foster back home, to the place he loved so much as a kid. He’ll have gobs of friends and family trying to get in the gate Sunday afternoon when the Aggies meet Louisville.

There’ll no doubt be little kids in the stands, too, who will look down at No. 5 for Texas A&M and think…someday…someday.

“That’s crazy to think about,” he said. “You’ve just got to keep dreaming. One day, it’s going to turn into a reality.”