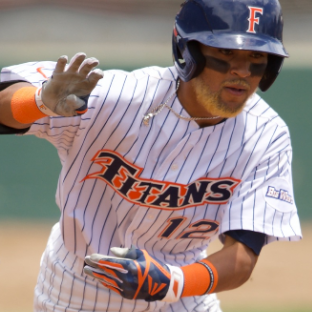 When Cal State Fullerton’s baseball game ended Sunday, starting second baseman Sahid Valenzuela emerged from the dogpile with a smile on his bleach-bearded face. His uniform, as usual, was dirty and his heart was full.

Valenzuela dreamed of this scenario shortly after taking up the sport as a 4-year-old, when he would sleep with his glove. When he was 14, he left his parents in Somerton, Arizona, to make it reality.

The move led the gritty 5-foot-9, 155-pounder to a stellar career with both St. Francis High and the Watsonville Aggies, a travel-ball team that helped him catch the eyes of Fullerton coaches.

MORE: Everything you need to know about Cal State Fullerton

“It’s definitely worth it now,” Valenzuela said after the Titans knocked off rival Long Beach State 2-1 to qualify for the NCAA Division I College World Series. “I’ve always been working for this. I’ve sacrificed a lot to be in this position.”

Valenzuela’s obsession with baseball began when he was in a stroller, watching his brother (Hector Alexis), father (Hector), and uncle play.

“He was a serious kid, never crying,” his father said. “He was paying attention. He learned so fast.”

Most summers, Valenzuela and his brother helped their father at work, washing cars and landscaping, without monetary compensation. Their paycheck was daily baseball lessons from Hector on the diamond located at a school behind their house.

Valenzuela was trained to become a switch hitter from the get-go. Hector had a bucket that held 300 baseballs and Valenzuela hit 150 balls from each side every day in the suffocating Arizona heat. After gathering the balls, the siblings worked on defense — ground balls and popups.

Each year Valenzuela advanced his skills. Now, he just had to market them.

Somerton — located 11 miles southwest of Yuma and 180 miles east of San Diego — had plenty of talent, but it wasn’t a destination for most scouts. Hector Alexis often told his younger brother that if he had a chance to get out of the small city of 14,287 and better his chances, do it.

Valenzuela played on several youth teams, including with the Aggies’ program in Arizona. When the Watsonville Aggies showed up for a Las Vegas tournament and needed a few fill-ins, Valenzuela accepted an invitation and shined.

Alex Rivera was one of the team’s coaches, serving under St. Francis head coach Ken Nakagawa. A few months later, Rivera returned to Yuma to watch some baseball when he ran into Valenzuela again.

“Scared” was a popular phrase used to hype the players up before games. Rivera walked up to Valenzuela and asked if he was scared.

“Of what?” Valenzuela asked.

“You scared to move up to NorCal with me?” Rivera blurted, joking.

“Nope. I’ll call my dad. I’m serious. I’ll go,” said Valenzuela, knowing that Rivera had some baseball connections through the Aggies and could help him gain exposure and hopefully get him placed at the next level.

It was a joke, but Valenzuela, already dialing his father’s number, called Rivera’s bluff.

“I was thinking, ‘What did I just do?'” Rivera recalled. “He was so pumped. How was I gonna tell him no?”

Valenzuela joined Rivera in his two-bedroom apartment in Castroville and enrolled at St. Francis.

Fullerton’s Sahid Valenzuela (12) batted a team-best .344 during the regular season — 4th in the Big West.

He quickly established himself as one of the greatest Sharks to step foot on a diamond. He showed range while making diving stops and made the most difficult plays look routine. A leadoff switch hitter, he had a knack for getting on base and being aggressive once he got there.

After his senior season, he was named first-team all-Santa Cruz Coast Athletic League for a fourth straight year.

Valenzuela made his transition look seamless.

“It was definitely a really difficult decision for me,” Valenzuela said of leaving his family, though they understood his fascination with the sport. “Alex made me feel at home and treated me like I was his own kid.”

Hector comforted her, telling her to think of it as him leaving for college four years early.

With the Aggies, he gained the exposure he desired, garnering interest from several D-I programs.

Valenzuela attended a camp at Fullerton his junior year. After the Titans’ assistants took notice, sixth-year head coach Rick Vanderhook scouted Valenzuela at a tournament in San Diego and gave the final thumbs up.

After showing a capable hand in the field, Valenzuela became a fixture in the CS Fullerton starting lineup.

“His instincts,” Vanderhook said of what stood out most. “He’s mature beyond his years, he’s mature about the game. You look at a freshman who can run faster, stronger and bigger, doesn’t mean he can play because he can’t think. Sahid can think. He’s smart.”

After proving himself in a few other starts, Valenzuela — initially an injury replacement — moved from shortstop to second base and never left the lineup.

“He didn’t start,” Vanderhook said. “Then he got in a real game and it was like hit, hit. He knows how to get hits.”

Valenzuela batted a team-best .344 during the regular season — fourth-highest in the Big West Conference — and was named Big West Freshman Infielder of the Year and to Collegiate Baseball Newspaper’s Freshman All-American Team.

When Valenzuela steps into the batter’s box Saturday in Fullerton’s CWS opener against No. 1-ranked Oregon State, he won’t be alone. He’ll make the sign of the cross on his chest, a gesture to God and his parents watching their TV in Somerton. He’ll have the support of the fan base he built at St. Francis and the new fan base he’s built in Fullerton.

Valenzuela hasn’t forgot about his Somerton roots. Or the courage it took to chase his dream.

“It’s an awesome and exciting feeling,” Valenzuela said. “I can’t describe the feeling. … This is why I came here. I knew Fullerton was a good program with a good history. I knew I’d have a chance to go to Omaha and now it’s happening.”

And his parents couldn’t be more proud.

“I’m so excited for him,” Hector said. “He’s just a freshman. This is what he dreamed of and talked about since seeing it on TV as a boy.”

A dream come true, get to play in Omaha! #CWS

This article is written by Jim Seimas from The Santa Cruz Sentinel and was legally licensed via the Tribune Content Agency through the NewsCred publisher network. Please direct all licensing questions to legal@newscred.com.