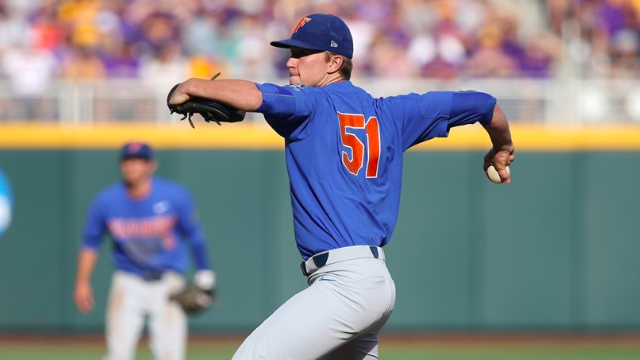 OMAHA, Neb. —  Here we are at the first game of the College World Series Finals, and just listen to that noise.

There’s a strikeout against the first LSU batter seen by Florida pitcher Brady Singer. Anyway, it’s the Gators against the Tigers, in a matchup that shows us the SEC is not just expert with the ball that gets passed and punted.

Florida’s Brady Singer (51) was the bridge to Michael Byrne that helped Florida nail down a Game 1 victory.

Two more strikeouts for Singer.  Where were we? Oh yeah. the fact that the guy who walked to the mound for LSU Monday hadn’t started a game in 848 days, while Singer’s last start was six days ago, well, that’s what you call an interesting pitching matchup. The Tigers had played 622.2 innings in the field this season, and Russell Reynolds had pitched 14.2 of them, with an earned average of 8.59. His last start was late in March of 2015, against Tulane. But there he was, in his mohawk haircut.

More Singer Ks. Actually Reynolds gave a mighty effort with three shutout innings, but lost the strike zone in the fourth and threw 12 balls in 15 pitches. That was it for him, and pretty soon the Gators had a 3-0 lead. Singer got in a little trouble in the fourth inning, too, with two leadoff LSU singles. But guess what happened? Right.

Yes, that’s the sound of Florida Gators baseball, and it’s getting harder and harder for anyone in Omaha to be heard above the Ks.

Singer left in the eighth, ahead 4-2, with 12 more strikeouts to throw on the Florida pile – the most ever for a pitcher in a CWS Finals game – and admiration from both sides.

“Maybe the best pitcher I’ve seen in the SEC for an opponent since I’ve been the coach at LSU,” Paul Mainieri said.

It would end 4-3, and no wonder Florida values its pitching. The Gators have walked a fine line to this high place, with 19 one-run victories. They got by Monday with six hits. “Once again, we do just enough to stay ahead,” coach Kevin O’Sullivan said.

Full #OmahaGators highlights from the 4-3 #CWS Finals win over LSU:

That makes eight games in a row with at least 11 Ks by the Gators. Alex Faedo fanned 11 and 11 in his two CWS victories, to put 22 strikeouts with no runs and five hits. He’s been even better than Singer.

This is the team that struck out 23 Wake Forest batters in one 11-inning super regional game.

This is the team whose starters have faced 134 batters in the College World Series so far and struck out 54 of them – 40.3 percent. Faedo, Singer and Jackson Kowar, who only lasted five innings in the 9-2 loss to TCU the other night. But that was long enough to strike out 11, including the first five batters.

“They’ve made my life pretty easy. What they’ve done is pretty incredible,” said Byrne, the guy with 19 saves.

“It’s one thing to have the stuff, and the ability and the velocity and everything they have, but to do it night after night and in the big games like they’ve done is really impressive,” shortstop Dalton Guthrie said. “There’s just something different about people that can pitch in big games.”

This is the team that has 65 strikeouts in Omaha, leaving the Gators within striking distance of Arizona State’s record of 77, and that one’s been standing for 50 years.

And Tyler Dyson, the freshman who gets the chance to close out LSU Tuesday night, with none of the Big Three available: “We’re not worried about how the outs happen. Obviously with Faedo’s slider, and Brady’s fastball and the way Jackson’s pitched, strikeouts are going to happen.”

But what of his own task Tuesday night, trying to finish what they’ve started? “Watching Faedo, and Singer and Kowar all year do their thing, it’s kind of fun to watch. I think they’re the best people in the world to learn from.”

Said O’Sullivan, “We’re going to have to get a special start from Tyler.”

Lately, special starts have been as Florida as orange juice. Delivered to the sound of whiffs.