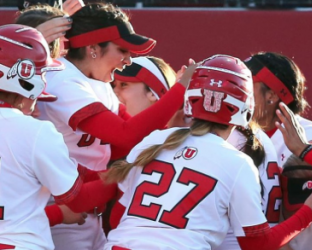 A walk-off win to beat your in-state archrival is always a treat, but Utah took it up a notch Friday by making it happen in the NCAA tournament.

With BYU three outs away from advancing to the regional final at the Utes’ home field, the regional hosts rallied for a dramatic 3-2 victory.

Utah was held to a run on five hits through six innings by Cougars senior McKenna Bull, but first baseman Bridget Castro got the seventh started with a single. The next batter was Heather Bowen, and she wasted no time knotting things up with a double into the left-field corner.

Two batters later, up stepped pinch hitter Hailey Hilburn, who entered the contest just 3-for-23 at the plate this season. You can probably figure out the rest.

Going into Friday, @hilburnhailey had exactly three hits this season.

The bloop single put the Utes in prime position to advance to the super regionals, as they still have two losses to play with. Their first crack at taking the regional is scheduled for 4 p.m. ET on Saturday against the winner of BYU and Mississippi State/Fordham.