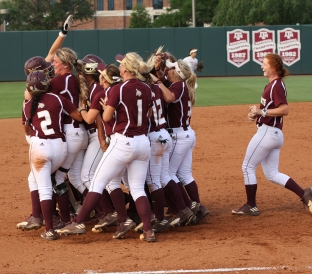 COLLEGE STATION, Texas. – Taylor Webb lofted a walk-off double into the right field corner to score Christiana McDowell and lift Texas State to a 2-1 12-inning win over Texas in the opening game of the 2017 NCAA College Station Regional.

McDowell reached in the 12th on a one-out single to right center and moved to third as Ariel Ortiz drew a two-out walk, setting the stage for Webb’s heroics.

Randi Rupp started and pitched all 12 innings to earn the win and improve to 28-9 on the season. The junior threw 164 pitches with 101 crossing the plate for strikes. She struck out eight of the 49 batters she faced and scattered nine hits.

The win improves TXST to 42-15 on the season and advances the Bobcats into the Saturday’s winners’ bracket game against either top-seeded Texas A&M or fourth-seeded Texas Southern. Moreover, the win, which was the first over UT in NCAA postseason play, marks the Bobcats’ first 1-0 start to Regional play since defeating Northwestern to open the 2009 Waco Regional.

Texas State finished with eight base hits in the contest and Texas nine. McDowell and Ortiz each had two hits for the Bobcats, while Devon Tunning and Kelli Hanzel also knocked two base hits for the Longhorns.

After stranding two runners on base in the first inning, Texas State took a 1-0 lead in the home half of the second as Corrina Liscano homered to left center. The homer was Liscano’s third of the season, moving the Bobcats season total to 46 and into sole possession of third on the TXST single-season list.

Texas knotted the game 1-1 in the fourth as Hanzel roped a RBI double off the wall in left center. The hit scored Taylor Ellsworth, who reached base on a single down the left-field line, from second.

Texas put runners on second and third with no one out in the fifth, but came away empty handed as Rupp and the Bobcat defense held firm. Kaitlyn Washington led off the frame with a double and moved to third on Stephanie Wong’s single through the left side. Rupp then induced a Tunning ground out to short before catching Jade Gortarez looking at strike three. Rupp escaped the inning on the next pitch as Celina Felix lined out to the glove of Kimberlin Naivar in left.

After neither team put a runner on base in the sixth inning, Texas drew a pair of two-out, four-pitch walks in the seventh before Rupp slammed the door on the threat with a strikeout of Gortarez – her sixth strikeout of the contest and 318th of the season.

Texas State pulls off the win after 12 innings! #NCAASoftball pic.twitter.com/kGSt5KKGmc

Texas State threatened in the seventh as Jaelyn Young singled to lead off the inning and pinch runner Jaclyn Molenaar was sac bunted to second by Liscano. However, Molenaar would be stranded 120 feet away as UT’s Tiarra Davis got out of the inning with a strikeout and fly ball to center.

Ortiz led off the ninth with a single that dropped in just beyond the glove of UT’s shortstop. Webb then walked and Jaelyn Young executed a textbook sac bunt to move the runners up to second and third. Liscano drew an intentional walk to load the bases, but the opportunity was squandered as Kennedy Cline hit into a double play to end the frame.

Texas State loaded the bases in the 11th, but came away empty as Davis got Sara Rupp to hit a slow roller to third to end the inning. UT then advanced a runner to third with two down in the top of the 12th; however, Rupp got Ellsworth to fly out to right on the first pitch she saw to end the threat.

Texas’ Brooke Bolinger suffered the loss, allowing Webb’s double and walking Ortiz without recording an out. Davis worked the first 11.2 inning and threw a career-high 184 pitches in the no decision.