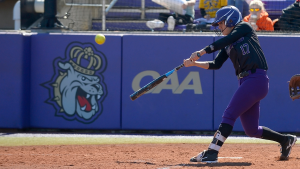 Junior Kate Gordon set a new program single-game record with three home runs against Tennessee. The center fielder went 7-for-8 on the day, hitting home runs in four consecutive at bats, while adding three singles to her stellar day at the plate.

The Dukes improve to 3-1 on the season while FAU fell to 3-6 and Tennessee was handed its first loss of the season, sliding to 7-1.

5 TO WATCH: Don’t sleep on these teams this season

GAME 1 vs. FAU
Gordon got the bats started for the Dukes against FAU with a leadoff single to right center and later scored from a fielding error. Sophomore Hannah File then sent junior Cambry Arnold and redshirt senior Megan Good home to score off a double to right, giving JMU an early 3-0 lead.

FAU’s Mia Olson homered in the bottom of the first, plating what would be the only run for the Owls in the game. Junior Madison Naujokas singled in the top of the second and was brought home on a single from Gordon to make it 4-1.

Good hit the first home run of the season in the third inning, expanding JMU’s lead to 5-1. Gordon took a shot to left field in the seventh, sending the ball well over the fence for her first homer of the year.

Junior Odicci Alexander made her first start in the circle on the year, pitching a complete game while only allowing two hits to earn her first win of the 2019 campaign. Alexander tallied 10 strikeouts which is two shy of her career-best 12 against Campbell on February 18, 2018.

FINAL | Led by Kate Gordon who went 4-for-4 and Odicci Alexander with 10 strikeouts in the circle, JMU takes down FAU 6-1! #GoDukes pic.twitter.com/ihL5FulyAK

GAME 2 vs. Tennessee
JMU came out firing in the first inning as Gordon hit a leadoff inside the park home run to center field. Alexander quickly followed, blasting her first homer of the season over the wall in center, giving the Dukes an early 2-0 lead.

Chelsea Seggern of Tennessee answered with a two-run home run in the bottom of the first to tie the game at 2-2. Gordon hit an out of the park home run in the second, bringing Naujokas across the plate while giving the lead back to JMU at 4-2.

In her third at bat of the game, Gordon hit her fourth straight home run of the day as she ripped one over the fence in left center. Good scored the final run for the Dukes (6-2) after sending a long ball to right center.

In the circle, Good pitched a complete game to pick up her second win of the season. She only allowed three hits and tallied six strikeouts.

QUOTING COACH LAPORTE
“I was really happy with the way our girls came out to play today. Getting two wins in a tournament like this is always good, but I felt we played well in the field and did a great job of getting the bats started early. We’re looking forward to another big game tomorrow against Kentucky.”

UP NEXT
JMU will play No. 18/21 Kentucky in its final game of the St. Pete/Clearwater Elite Invitational tomorrow. First pitch is set for 1 p.m. and the game will be available to watch on ESPN3.