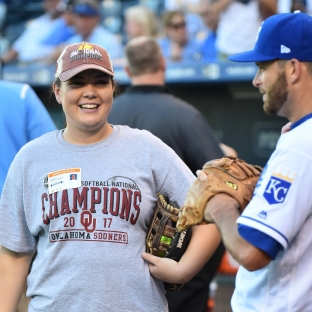 That’s just what life has been like of late for Oklahoma’s junior left-hander Paige Parker. And there’s little sign of any letup in terms of extracurriculars now that the Missouri-bred southpaw is on summer break.

Fans last saw Parker pitching in Oklahoma City in Oklahoma’s two-game sweep of Florida at the WCWS, but Kansas City Royals faithful were treated to a ceremonial first pitch from the Sooners’ leading left-hander.

Things went swimmingly when the lights were on in front of a packed crowd, but some practice tosses between Parker and Royals backup catcher Drew Butera really drew the attention of fans on social media.

Safe to say the @Royals were impressed when @paigeparker008 warmed up last week before her first pitch.

Sure, Parker is used to keeping hitters of balance as she pounds the strike zone, but knocking over the catcher? That’s one for the blooper reel. And something about watching a group of Major Leaguers gawk and guffaw over the young left-hander just makes you want to laugh. It’s always fun to see athletes enjoying their craft and it looks like the Royals enjoyed playing host to their specially invited guest.