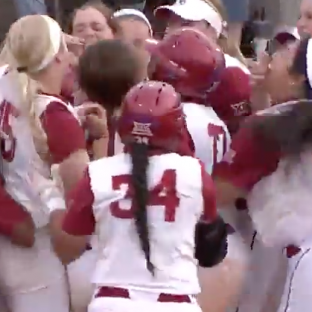 Did you really think it would be that easy to expel the defending national champions from the tournament?

Down 2-1 in the sixth and 4-2 in the 10th, Oklahoma put together a pair of rallies to give Tulsa its first loss in regional play and set up a winner-take-all contest Monday afternoon for the super regional spot against Auburn.

10 innings of Sooner Magic.#Sooners stay alive and compete tomorrow against Tulsa at 12CT in game 2 of the Regional Finals! #RoadToWCWS pic.twitter.com/w3FQNnrQuX

After Tulsa scored a run in each of the first two innings and kept the Sooners off the scoreboard through four, it was looking like the Golden Hurricane was going to ensure there was a new champion in 2017. But a Nicole Pendley solo home run in the fifth inning cut it to 2-1, and two walks and a single to start the sixth knotted things up at 2.

TIE. GAME. Caleigh Clifton scores to even it at 2-2! pic.twitter.com/eDQH2SxInT

That’s where it stayed all the way to the 10th, when Tulsa retook the lead on a one-out RBI double by Tori Stafford and an RBI single two batters later and got the dugout ready to celebrate.

But the home team quickly put an end to that celebration, needing just three pitches in the bottom of the 10th to tie the game. Nicole Mendes led off with a single on the first pitch of the inning, and she came home on a blast to left by Caleigh Clifton. Shay Knighten then singled, and Sydney Romero, to paraphrase the great Jack Buck, said ‘We’ll see you tomorrow afternoon.’

This is what Sooner Magic looks like! @syd_syd2 with the walk-off HR to force a Game 7 rematch against Tulsa in the Norman Regional! pic.twitter.com/WVxm31Qm29

Tulsa and Oklahoma will duke it out one last time on Monday, with first pitch scheduled for 1 p.m. ET at the OU Softball Complex in Norman.